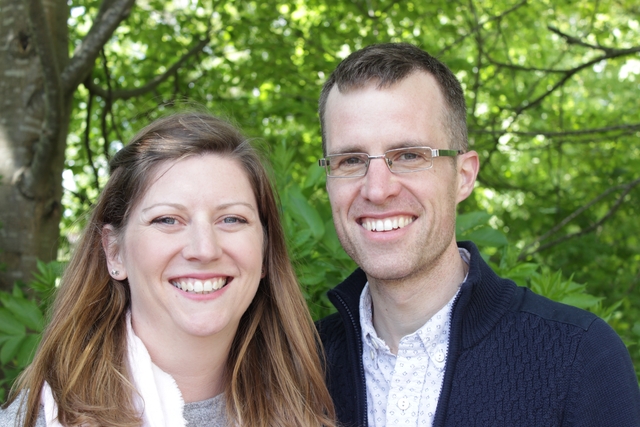 HUSBAND and wife Dan and Jude Greenfield will share both pastoring and parenting after their ordination this summer.

The couple will job-share the role of curate in Crofton parish from July. They’ll divide up the responsibilities of working in their new parish alongside the joys of parenting a toddler.

Bishop Christopher will ordain them at our cathedral on June 30, along with seven others as deacons. Later in the day, he’ll ordain another eight existing curates as priests, meaning they’ll be able to celebrate Communion for the first time.

“Jude and I met at university and served in the student ministry of our local church,” said Dan. “Soon after getting married, we both became members of staff at the church.

"The call to ordination was different for each of us. We had worked for the church for a number of years before spending some time abroad in ministry. While in Australia, we spent six months with an old friend who was the priest of an Anglican church.

“Soon after arriving back in the UK, we were driving up the motorway and Jude turned to me and said, “I think I might be called to ordination!” We both ended up working for Christ Church, Winchester, and Jude began the discernment process. A few years later, I too felt called to ordination.”

The couple both trained for three years at St. Mellitus College in London, while working at Christ Church in Winchester. They would commute for one day a week to London and elsewhere for residential weekends.

Jude was two years ahead of Dan but took a year out to have their daughter. Jude graduated last year and Dan completes his studies this summer.

“We are used to working together and now with a toddler are keen to learn what ministry looks like whilst managing family life,” said Dan. “We’re really looking forward to our new parish and the vicar and the team have been really understanding. We’ll be sharing a curacy post but will each have our own responsibilities within that.

“Clergy couples are less rare than they used to be, and we’re keen to learn from married clergy how they do life.”

The full list of those to be ordained by Bishop Christopher is: