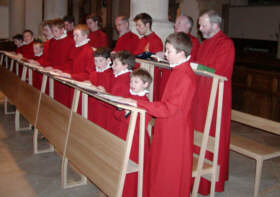 PORTSMOUTHS cathedral choir has grown so large that new choir stalls have been made to fit them all in.

The total number of choir members rose from 10 boys and six men in 1996 to the present total of 24 boys and 14 men. The expansion prompted the commissioning of new choir stalls that were three feet longer than the old ones - to help squeeze in anything up to 24 choristers at a time.

The trendy new stalls were designed by the exciting London design team Barber and Osgerby. It specialises in high-class and corporate furniture for clients such as fashion designers Paul Smith and Stella McCartney.

And they were manufactured by Windmill Furniture, based in Chiswick. The £15,000 cost was met by donations from the Friends of Portsmouth Cathedral and other generous donors. The new stalls replaced older portable stalls that were built in the 1990s.

The cathedral's master of choristers, David Price, said: "Unlike many cathedrals, we've seen our choir expand. That reflects the success of the cathedral's gap-year scheme, through which young men who have just finished their A-levels are able to spend a year singing in Portsmouth Cathedral choir prior to university. Many of them have won choral scholarships to places such as Oxford, Cambridge and Durham universities.

"We have a carefully planned recruiting schedule, both nationally and locally, and work hard at the marketing side of our cathedral's music.
"The re-ordering of the cathedral in the early 1990s dispensed with the 18th century box pew and stalls to create a bright, open space within the 17th century quire.

"Our previous choir stalls were a temporary set, designed and built by the cathedral's own in-house carpenter - himself a retired shipwright and choir man. They lasted well and were flexible enough to be moved to different parts of the building, according to service requirements. They have now been moved into the song school, where we rehearse.

"The young designers - Ed Barber and Jay Osgerby - were selected after a lengthy process organised by the cathedral's fabric advisory committee. The design is elegant, but also highly functional, and the new choir stalls are enhanced by the cathedral's light and airy atmosphere."

Men from the choir have already shown their sense of fun - by stripping to the waist for a set of classy, black-and-white photos used in a 2003 calendar that now adorns walls around the UK and abroad. For more information, see www.heavenlyhunks.co.uk.