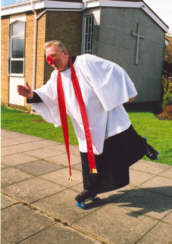 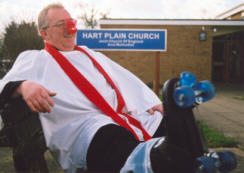 CLERGYMAN Tim Jessiman will be getting his skates on for this year's Red Nose Day.

He will be roller-skating around half of the diocese on Friday (March 14), dressed in his full robes - and a hairy red nose. His 40-mile trek will take him from Wecock through Gosport, Portsmouth and Hayling Island.

And he'll also be dyeing his hair red for the day - in line with the theme of Red Nose Day 2003. All the cash raised will go towards Comic Relief, which helps disadvantaged people in the UK and abroad.

The Rev Tim Jessiman is priest-in-charge of Hart Plain Church in Wecock - a joint project run by both the Church of England and the Methodist Church. Tim is the Anglican priest there and leads the church jointly with a Methodist colleague.

He has been sponsored by local ski and sports firm Filarinskis, which has donated his roller skates. As well as his black cassock, white surplice, red stole (scarf) and red nose, he'll also be wearing a 'Sponsored By Filarinskis' sign on his back.

He said: "I have already cycled this route to raise money for Wecock Football Club, and last Red Nose Day I roller-skated around my parish. This seemed like the next step up!

"I fully expect people to look at me gliding past and think: 'There's some madman dressed as a vicar!' They might not realise I'm a real one!

"But I do think it's important for everyone to do something on the day. Comic Relief is my favourite charity and thinking about alleviating poverty is particularly important at the moment, when we are on the brink of war."

Tim's route will take him from Wecock Community Centre, via Portsdown Hill to Gosport. He'll catch the ferry to Portsmouth, roller-skate through the city and take the ferry to Hayling Island. He'll then return to Wecock via Rowlands Castle.

Another clergyman from the diocese will also be dyeing his hair for Comic Relief on Friday (March 14). The Rev Stuart Cradduck, curate of St Alban's, West Leigh, will perform his normal clergy functions on Friday with the front of his hair coloured bright red.