Former bishop will give high-profile lecture 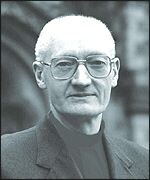 A HIGH-PROFILE former bishop is to outline his views on religion and politics in our diocese this month.

The Rt Rev Richard Holloway, the former Bishop of Edinburgh and ex-Primus of the Episcopal Church in Scotland, will give this year’s Robert Dolling Memorial Lecture.

Entitled ‘Bringing the Exiles Home’, it will be a chance for people to hear his forthright views on the future of Christianity and its contemporary situation.It takes place on Monday 27 October from 7pm at All Saints’ Church, Commercial Road, Portsmouth.

There will be an opportunity to ask questions and to chat informally after the lecture.

Widely regarded as one of the most outspoken figures in the modern Church, Richard Holloway has written extensively on the problems of religious belief in the modern world, particularly on the complex ethical issues of sexuality, drugs and bio-ethics.

He was Chair of the BMA Steering Group on Ethics and Genetics and a Member of the Human Fertilisation and Embryology Authority. He has written more than 20 books on religion and ethics, including Godless Morality, Doubts and Loves and his most recent publication, On Forgiveness.

The Dolling Lectures are given in memory of Robert Dolling, a former Portsmouth priest who initiated a series of lectures in Landport in 1890 as he worked tirelessly for social justice among the poor of the city.