OUR bishop helped to lead a 24-hour worship marathon - by celebrating an alternative multi-media Eucharist. 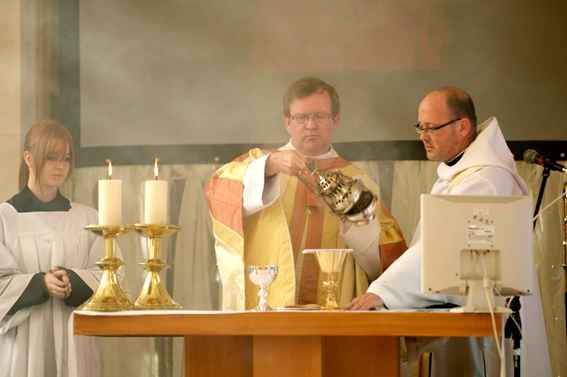 Bishop Christopher was one of dozens of worship leaders from across the diocese who took part in a ‘24 Hours of Worship’ event at Portsmouth Cathedral – from 7pm on October 29 to 7pm on October 30.

Churchgoers worshipped God in a different style each hour, ticking off Advent, Christmas, Lent, Palm Sunday, Easter and Pentecost throughout the night and the following day. The event embraced a huge variety of worship styles, from contemporary worship songs to silent reflection, from storytelling to drumming workshops, and from prayer installations to traditional hymns.

People came to a style they were familiar with but found themselves staying on for something they had never experienced before. And those leading the worship were also inspired as they found new ways of worshipping that they hadn’t seen before.

Bishop Christopher marked Easter at 12noon on the Saturday by leading a multi-media Eucharist which featured ambient music, film clips projected onto a screen, and the gospel story told through animation. Participants confessed their sins by laying a stone at the foot of a wooden cross, and prayed for parishes across the diocese by lighting candles and placing them on a map on the floor.

It had been organised by Blesséd, an alternative worshipping community based at St Thomas the Apostle, Elson, in Gosport, which has been leading such services for a number of years.

“It was great to lead the ‘Easter’ service,” said Bishop Christopher. “The service is so familiar, yet the different approach made it all especially thought-provoking. Holding the bread and wine while images of Jesus being crucified were being flashed up on the screen was a reminder to me of just what Jesus actually went through.

“I also enjoyed taking part in some of the worshipping experiences that others were leading. The very next thing was a simple storytelling session in which one of the appearances of the risen Jesus was re-enacted for children. That was just as powerful.”

Among the highlights were a visit from Terl Bryant, founder of the Psalm Drummers, who led a workshop helping participants to worship by rhythmic drumming at 8pm on the Friday.

Chris Tait, from St James Church, Clanfield, said: “It opened my mind to methods of prayer and what it means to be praying. If I’m silent, my mind tends to wander too easily, so drumming actually helped me to focus on praying.”

That was followed at 10pm by prayer installations from the Friday Fridge team, who normally welcome late-night revellers to St Jude’s Church, Southsea, at that time. Participants moved at their own pace through a series of stations that helped them to engage with the theme of ‘waiting’, which tied in with the season of Advent.

Christmas was celebrated at midnight with chants made popular by the Taizé Community in France, led by the Rev Charlie Allen from St Mary’s, Portchester. Then there was plainsong led by the cathedral choir at 2am to celebrate the season of Epiphany.

Roger Sutton, from St Jude’s Church, Southsea, said: “The Plainsong Lauds was restful, and the chants echoed beautifully throughout the cathedral. I was able to relax and imagine how monks through the centuries would wake up early to worship in this way.”

Ordinands – who are training to become clergy - cooked pancakes at 4am to mark the start of Lent. There was a healing service at 6am led by hospital chaplains from the Queen Alexandra Hospital in Portsmouth, and the Rev Roger Calder from St Saviour’s, Stamshaw and St Alban’s, Copnor, heard confessions at 7am.

There was a traditional Morning Prayer at 8am, and Portsmouth Cathedral Choir sang a choral passion – Allegri’s Miserere – at 10am. Bishop Christopher’s multi-media Eucharist to mark Easter was at 12noon.

The team behind the after-school Messy Church group at St Wilfrid’s Church, Cowplain, shared their version of Easter at 3pm, with a variety of art and craft activities. There was a Book of Common Prayer Evensong at 5pm and the event closed with a Pentecost celebration from 6pm-7pm led by a contemporary worship band and a sermon from Diocesan Secretary the Rev Wendy Kennedy.

The event was organised by the Diocesan Liturgy and Worship Group, which includes clergy and worship leaders from across the diocese.

Event producer Ben Mizen said: “The thing that struck me was the flow of worship and friendship throughout the night and the next day. People came for an hour and stayed for three. They met old friends and met new ones. And they seemed to go away inspired about how they could worship God in many different ways.”

And steward Ernie Chapman, from Holy Rood Church, Stubbington, said: “It was an eye opener to see so many different forms of worship within a short space of time and a great joy to spend so much time in the cathedral as well as meeting new people.  I’ve never been a ‘cathedral man’, but as result of the time spent there, I really did feel at home in the magnificent building and I now think of it as me having a belonging there.”