Headteacher to become a 'Reverend' 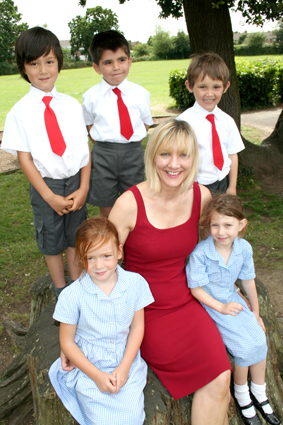 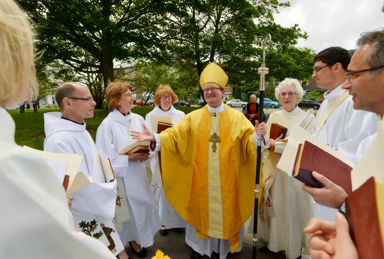 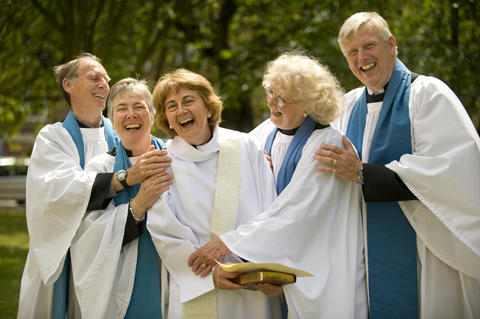 The Rev Anne McCabe with friends after her ordination

She’d been talking to her vicar about becoming a Reader – but he was convinced she should be ordained as a clergy person. As she walked home, she realised that’s what God wanted her to do. Five years later and Alice, who is headteacher of St Alban’s C of E Primary in Havant, has been ordained in Portsmouth’s Anglican Cathedral.

The Bishop of Portsmouth, the Rt Rev Christopher Foster, ordained nine people as deacons and five as priests in our cathedral on June 30. Candidates are initially ordained as a deacon, which means they are called ‘the Reverend’ and can lead church services, preach sermons and offer pastoral care. A year later, most are then ordained again as ‘priests’, which allows them also to lead Communion services.

Alice Wood, who goes to St Matthew’s Church, Blackmoor, near Petersfield, was ordained as a deacon this year, and is expected to become a priest when she is ordained again next summer.

“I’d had a nebulous feeling of unease that I ought to be doing something else for the Church, but I couldn’t tell you what it was,” she said. “I was already running Sunday School at St Matthew’s and was on PCC, deanery synod, Bishop’s Council and the Board of Education.

“I thought perhaps it was a call to be a Reader and went to see my vicar, the Rev Will Hughes. He said: ‘I’ve been waiting for you to talk to me about this. I think you should go for the priesthood’.

“As I walked home in the pitch black, I knew that was it. On another occasion, I was wondering if I should send in the last bit of paper to apply, when a lady from our church said: ‘Alice, I’ve had a picture from God of you wearing a priest’s outfit behind the altar’. I’d asked for confirmation from God and there it was.”

Alice spent three years studying on the Southern Theological Education and Training Scheme (STETS), which is based in Salisbury. She did her reading and essay-writing in the evenings and at weekends.

“I’ve really enjoyed the depth of the study, the reading, the discussion with other students from different denominations, and the residential weekends with like-minded fellow students,” she said. “My tutor is from the United Reformed Church and there are Baptists and Methodists on the course, so there is a real breadth of experience and different ways of worshipping.

“I’ve got into the rhythm of studying at evenings and weekends, and my husband has taken over the cooking, cleaning and washing. Without his support, it wouldn’t have been possible.

“The children at school are used to people with dog collars, so it hasn’t been a big deal for them. I’ve filmed pupils and used some of their work as part of the course, including the ‘Profile of God’ from Year 2. Being a student helped me to re-examine the learning process and make some changes at school too.”

She’ll be assistant curate at St Andrew’s and Church of the Resurrection, Farlington. As a self-supporting minister, she’ll keep her job and work with the church at evenings and weekends.

Among others ordained was Mark Tariq, who came to the UK from Germany in 2006 to study international business studies. He felt God’s call and has spent three years studying at Wycliffe Hall, Oxford.

And Anne McCabe will start work at Christ Church, Portsdown, after two years at Ripon College, Cuddesdon. She used to work for Tearfund and VSO, engaging with those who give, pray and volunteer for the charities.

“The Christ Church family have already me feel very welcome,” she said. “I hope I can serve them well as I learn.”