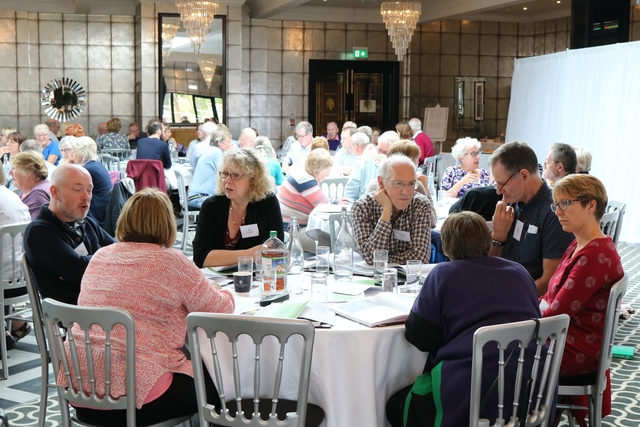 WORSHIPPERS were given a chance to think about how to grow their churches and develop disciples.

More than 100 clergy and lay leaders from around 40 parishes spent three days on a Leading Your Church Into Growth (LYCIG) conference in Liphook last month.

It’s the second time our diocese has invited parish representatives to a full-scale LYCIG course. A similar event happened last year for a different set of parishes.

A LYCIG team led by retired Archdeacon the Ven Bob Jackson helped them to look at issues including how to develop a strategy, how to become more welcoming and how to develop worship that helps church to grow.

There was time to listen to input from Bob and his colleague, Canon Dave Elkington, time for discussion in smaller groups, and a chance to put together plans with colleagues from the same benefice.

The conference, at the Old Thorns Hotel in Liphook, was set within the context of worship and culminated with a final Eucharist led by Bishop Ian Brackley. During this Eucharist, benefice plans were submitted as part of the offertory.

The Rev Richard Hutchins, curate at St Mary’s, Liss, said: “It shows the passion of the diocese for church growth that it has invested in something like this. It’s good to have conversations with people who I might otherwise never have met and develop relationships across parishes.”

Harry Walker, from St John’s Church, Newport, said: “It has been a marvellous opportunity to draw aside and benefit by hearing people’s stories and learning from them. We’ll go back to our church equipped with the tools for growth. It has been very uplifting.”

The Rev Linda Bushell, interim minister at Brighstone, Brook, Mottistone and Shorwell, said: “I’ve enjoyed it. There are some very good ideas that we can use. We were hoping to do some of these things anyway, but it has strengthened our resolve. There have also been a lot of conversations, formally and informally, which have helped.”

Locally ordained minister the Rev Tony Richards, from Sandown Bay, said: “I have enjoyed it, and I think the venue has helped. I don’t agree with everything that has been said, but there have been a lot of ideas across a broad spectrum – some for larger churches that have more resources, and some for those that are small or diminishing.”

And Margaret Selby, from St John’s Church, Purbrook, said: “It has been a fabulous experience. It has opened our eyes to try and build our congregation, and given us some ways to do it. I need to be more proactive at encouraging people I know to come back to church.”

Conference delegates were told they were the diocese’s biggest asset in terms of mission, and that’s why it was worth investing in them. Each went home with LYCIG material to share with their congregations over the next few months.