MY FAITH: Cancer won’t stop me getting ordained this weekend 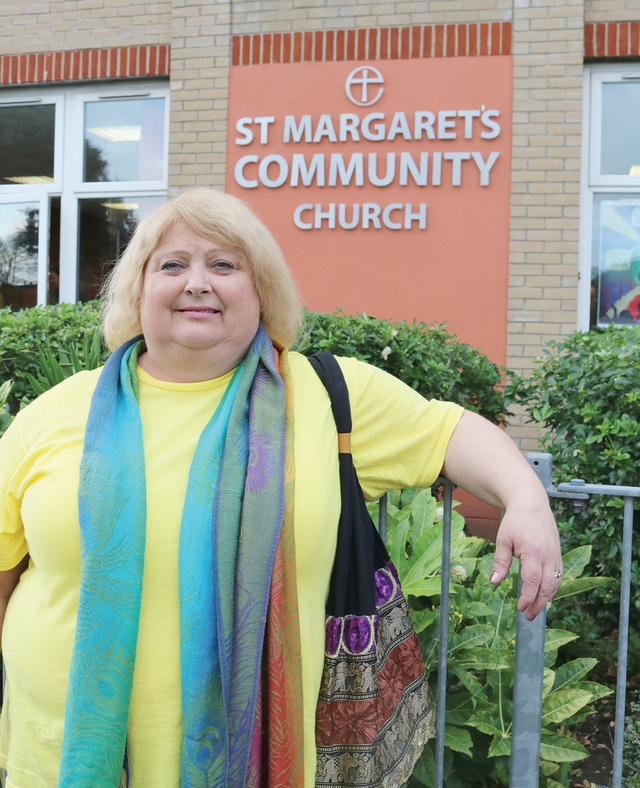 The Rev Jeanette Hayward was ordained by Bishop Christopher in June 2018, and sadly died three months later. We interviewed her earlier that year about her plans for ordination, and the story was shared across the internet from that point. Jeannette was happy to tell her story of faith face-to-face to individuals, in front of congregations, or to the media, so that she could highlight how God had changed her life - and how her faith sustained her throughout a long illness. The interview remains on our website with permission from her family.

JEANNETTE Hayward will be ordained as a clergy person this weekend (Sat 30 June) – despite facing a diagnosis of terminal cancer.

She’s been training for the past three years to become a Reverend, alternating her theological study with regular courses of chemotherapy. She has been close to death twice, and each time her friends’ prayers have helped her to pull through.

The 61-year-old grandmother is part of the congregation at St Jude’s Church, Southsea, and has recently been part of the team from St Jude’s that has relaunched Sunday worship at nearby St Margaret’s Church, in Eastney.

On Saturday morning, she’ll be one of nine people who the Bishop of Portsmouth will ordain as deacons. The Rt Rev Christopher Foster will place his hands on each of their heads and pray for God’s Spirit to come down on them. The ceremony means they become clergy men and women, with the authority to lead services and preach, wear clergy robes and dog collars, and to be called ‘the Reverend’.

Later in the day, another eight people - who were ordained as deacons last year - will be ordained as priests. Bishop Christopher will wash their feet, in an echo of how Jesus washed his disciples’ feet, before he places his hands on their heads to ordain them. They will then be able to celebrate Holy Communion.

Jeannette Hayward was born in Nairobi, Kenya, in 1957, and among the family’s friends were Joy and George Adamson, whose lives were publicised in the film Born Free.

When Kenya declared independence, Jeanette’s father, a policeman, decided they needed to leave. The family of seven crossed the Sahara in a Land Rover, arriving in Southsea where they had family.

Jeannette joined St Jude’s Church, being part of its vibrant youth group. She left school at 15 and married her husband Steve aged 18. They had three children Chris, Andrew, and Ellie, but money was always a struggle. She was diagnosed with clinical depression in her mid-40s, coping with teenagers and financial worries.

“Just before our 30th wedding anniversary, I packed my bag and wrote my husband a letter to leave,” she said. “What helped me was a Christian book I read. I realised I was trying to change him and I that it was me who needed changing. I’d looked to him to meet all my needs, which was totally unfair.”

They enrolled on a marriage course run by nearby St Simon’s Church, which helped to turn things around. They learnt to clear the air together rather than to sulk. The couple have since run marriage courses at St Jude’s.

Jeannette worked as Pastoral Care Co-ordinator at St Jude’s Church from 1999 to 2015, when she had to step down because of her health.

“I absolutely loved that job,” she said. “I’d always done voluntary pastoral care – visiting, leading Alpha, speaking at Alpha, and people had always suggested I do it professionally.

“I’ve felt God calling me all my life. I knew friends who’d gone through the training to be ordained and I knew it was very academic and thought I couldn’t do it – because of my dyslexia.

“Then I finally gave in, during one of our vicar’s sermons about taking risks. I realised it was time to leave home – St Jude’s was my home. Because of my chemotherapy, I had to defer for the first year. Then we started training people via the Portsmouth Pathway which has been able to offer me an accessible and flexible way of training during this demanding period of my life."

Jeannette had been diagnosed with bowel cancer back in 2007. Surgeons removed part of her bowel and she was in excruciating pain for months afterwards because it had gone gangrenous. She had a 10-20 per cent chance of survival – but mobilised friends and fellow congregation members to pray for her.

“I was about to write letters to my family about dying, but had a sense that God would look after me,” she said. “God filled me with that peace ‘beyond all human understanding’. I’ve felt like that ever since."

She survived, but the cancer spread to her lungs, meaning that Jeannette needed more debilitating chemotherapy treatment. Then there was the shock of her husband Steve also being diagnosed with cancer, which meant he was also going through similar treatment.

And after that she was rushed into hospital with acute pain which turned out to be bacterial meningococcal meningitis. She was in a coma for four days, again supported by prayer from those in her congregation.

For her theological training course, she has attended training once a week with the Portsmouth Pathway, based at St Luke’s Church in central Portsmouth. She has also spent some weekends studying at Ripon College Cuddesdon near Oxford. If her health is poor, or she cannot risk infection because of the chemotherapy, she has Skyped into lectures from home.

“I’ve prayed with a lot of people who are dying,” she said. “They can be almost comatose, but they can say the Lord’s Prayer. It’s one of the last things to go. Our goal is to see God face to face. It’s awful for those left behind – the pain of separation. But God is a loving God and he can heal the past. He doesn’t change the past, but he can heal it. I believe in miracles—of course.”

Her latest scan showed she had two small tumours in her lung, one on her rib and a tiny one in her liver. She is still having chemotherapy.

"I’m also so grateful to all the medical staff who have helped me over the past 11 years, for their patience, their good humour and their expertise in helping to keep me alive."

Canon Mike Duff, vicar of St Jude’s, Southsea, said: “St Jude’s has shared in all the twists of Jeannette’s life-journey. We have wept at her diagnosis, prayed for her survival, rejoiced in her healing and affirmed her calling.

"Jeannette offers an extraordinarily powerful witness to her hope in Jesus in the face of death, and we are delighted she will remain part of St Jude’s and St Margaret’s congregations as curate. Although we will have to manage her workload carefully, we look forward to the insights she will bring to our staff team and the unique ways she will be able to encourage so many.”

The full list of those being ordained on Saturday is as follows:

To be ordained by the Bishop of Portsmouth, the Rt Rev Christopher Foster, at Portsmouth Cathedral on Saturday 30 June: