Couples believe church is still the best place to wed 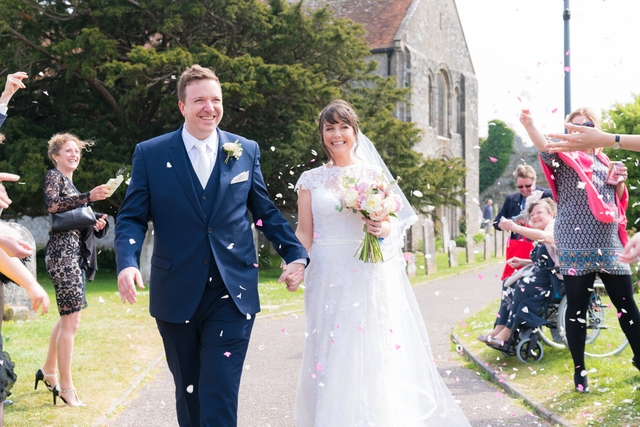 KATY and Jack Fryer really wanted to get married at St Mary’s Church in Portchester – but they weren’t sure if they could.

Her parents got married there 40 years ago, and they knew it would mean a lot to both families. They were relieved to discover that the family connection would allow them to have their dream wedding last summer.

Not only that, but everyone they met from the church made their preparations so much easier. They felt so welcomed into the church community that they kept going back.

St Mary’s, inside the historic Portchester Castle, was the most popular wedding venue of all churches in our diocese in 2017. Between 40 and 50 couples get married there each year, mostly between April and September. On many Saturdays they perform three ceremonies a day, and some people get married on weekdays or Sundays.

And couples who get married there often speak highly of the church’s involvement in their big day – taking them through the service in advance and answering their questions.

Katy, 31, said: “My mum and dad – Clive and Gwyn White – were celebrating their 40th anniversary, and we knew it would mean a lot to both families to get married there for sentimental reasons. We knew the marriage itself would have more meaning in a church.

“It’s also so beautiful and it was big enough to fit in people who couldn’t come to other parts of the day. My dad and I walked from the castle gate to the church, as he did 40 years before, and we met the bridesmaids and my mum outside.

“We had been to the church to hear our banns read, and everyone was so welcoming. People came up to us and remembered who we were. My mum and dad renewed their vows there the week after our wedding, and the four of us are trying to go to church again together.”

And Jack, also 31, said: “Everyone was so brilliant. When we first met Wendy, the administrator, we weren’t sure if we could get married there, but we had that family connection. She answered all our questions, and it was a dream to work with her.

“Then Revd Ian came round and took us through the service, the hymns and the prayers. When we met him, we knew the service would be great. Some of Katy’s family who go to church were saying how wonderful his words were in the service.”

Parish administrator Wendy Pyatt is often the first person that couples speak to. She prepares orders of service for them and helps to prepare bell-ringers, organists, choir members and to link them to a clergy person.

“I now produce bespoke timelines for each couple, which we give them at wedding preparation, which has helped immensely,” she said. “We also give them a folder with all sorts of information in to help them make their choices.”

Jemma and Michael Cook also got married at St Mary’s Church, Portchester, last year. They enjoyed attending church so much that they came every fortnight for a year before their wedding in May.

“I love this church and had always dreamt of getting married there,” said Jemma, 34. “It had such a family atmosphere, and it was so full it was hard to get a seat.

“I’d grown up in church and led Sunday School and Michael had been an altar boy on the Isle of Wight, so it was important for us to get married in church. The whole day was brilliant, but saying our vows to each other in a church was the meaningful bit.”

Weddings are a key opportunity for the Church of England to offer ministry and support to people at a key moment in their lives. Wedding preparation can often be crucial to help couples to think not just about their big day, but also about the issues they’ll face in the rest of their married lives.

Research commissioned by the Church into why couples choose church weddings suggested that many are nervous when they make their first enquiry, and that the attitude of the initial person they speak to is crucial.

The research also suggested that the success or otherwise of the Church’s engagement with wedding couples depends largely on our vicars. Their personal warmth in marriage preparation and their welcome on the day makes a vast difference.

That’s why the national Church created high-quality resources for parishes to use with wedding couples, to help explain the process. Those resources are available on www.churchprinthub.org. It also launched www.yourchurchwedding.org as a website for couples to browse, explaining everything including fees, music, licences, banns and more.

The Church also has a presence at wedding fairs in our diocese alongside displays by photographers, wedding dress makers and limousines. Mothers’ Union members in Portsmouth diocese have staffed stands at such fairs for the past 10 years, encouraging couples to consider getting married in church.

Former diocesan president Pauline Wale, who organises teams of volunteers to be there, said: “We do six or seven wedding fairs a year, often in hotels, and usually all day Sunday. We offer people cake and ask when and where they are getting married and if they’ve considered a church wedding.

“Many have the preconception that they can’t get married in church because they don’t go to church. Some of them aren’t sure because they are divorced, so we encourage them to have a conversation with the incumbent about it. We can give out leaflets and resources. To know that we’re helping people to think about church weddings is quite rewarding.”

For more details about getting married in one of our churches, click here.