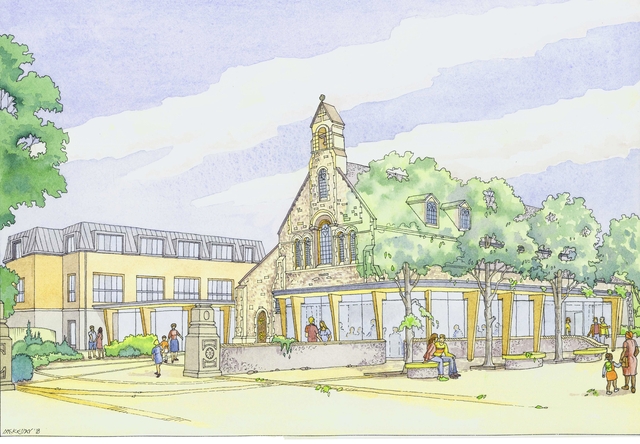 AN inner-city Portsmouth church launched its redevelopment plans with an event hosted by MP Stephen Morgan.

St Luke’s Church wants to use its city centre location to serve those who live and work in the local community more effectively. That includes those who work in the city centre and thousands of students living in newly-built tower blocks nearby.

Worshippers want to open up its building to passers-by on Isambard Brunel Road, creating a brand new entrance and a café on the west side of the existing building – as well as revamping the existing community garden.

The £1.5m project would also involve revamping the interior of the Victorian church and its adjoining church hall, providing better facilities for community groups that already use the building and making it available for others too.

The church is also working with Portsmouth City Council on plans to redevelop the area to the west of the building, with an nearby underpass filled in and landscaping to make the area look more attractive.

It also hopes to employ two people who can work alongside young adults who may need help to take advantage of local employment opportunities.

The vicar of St Luke's, the Rev Annie McCabe, said: "We want this to be a place of worship and spirituality that offers rest in a busy world, authenticity, meaning and welcome - where you won't be judged, where you can let your guard down, where you can get a sense of something more than you are.

"We want to offer it as a performance venue, be a place where you can work or study or hold public meetings, and a space for hospitality. We want a new entrance on Isambard Brunel Road that will be appealing, transparent and accessible. And we want to create a green space around the building, because there's not much of that around here.

"Doing nothing is not an option. The amazing people in this community deserve better, they deserve a place that really works for them."

Portsmouth South MP Stephen Morgan – who is also the local ward councillor – is enthusiastically supporting the plans. He hosted a launch event for local residents, community groups, councillors and interested parties on September 21.

The MP said: “I’m really excited about the difference this development could make to this special part of our great city. There has been a lot of re-development recently, and there are many more people living locally, as well as all those who work in the city centre.

“Having a place in the heart of Portsmouth that can give them some spiritual support, as well as the chance to relax and unwind in the café or community garden, will be really helpful.

“St Luke’s has already done a lot to bring people together – it hosts an annual barbecue at the start of each autumn term to bring together brand new students and local residents. It also runs community fairs and fun days, and hosts all sorts of local community groups. I’m hoping this development will make it even easier for them to bring local people together.”

The Diocese of Portsmouth has indicated its support for the plans, which will shortly be considered by Portsmouth City Council.