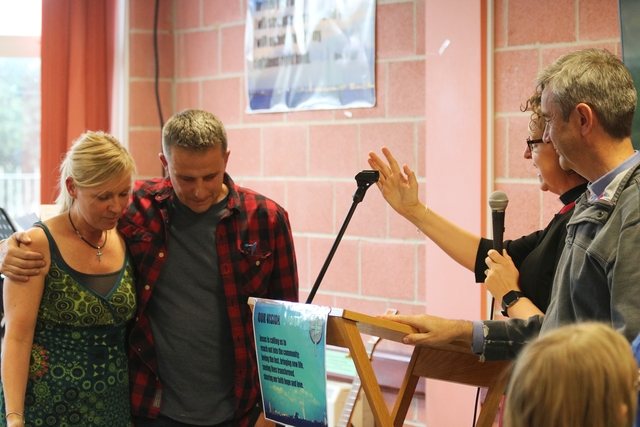 A NEW congregation celebrated its first birthday - as its leader was licensed as a pioneer minister.

St Margaret’s Community Church, which was created as a church plant from St Jude’s Church, Southsea, marked its first anniversary with a special service. Its leader, Fran Carabott, was licensed by the Archdeacon of Portsdown, the Ven Joanne Grenfell, to be a half-time lay pioneer minister.

The congregation launched its Sunday services in October 2017 with a group of around 15 people from nearby St Jude’s, meeting in the church hall of St Margaret’s Church on Highland Road. Over the past year, the regular congregation has grown to between 50 and 70 people.

Worshippers have launched a parent and toddler group, weekly fitness sessions for men, family fun days, and a regular pub quiz as they find new ways to serve the local community. And they’ve timed their Sunday services for 4 pm each week, to attract those who might find it difficult to attend on Sunday mornings.

Around 100 people crammed into St Margaret’s church hall for the first anniversary service, which included lively worship, the official licensing, a sermon by the archdeacon, and a bring-and-share meal afterwards. It also featured congregation members explaining why they enjoy being part of the St Margaret’s community.

Steve Dawson, who was part of the original team of 15 from St Jude’s, said: “It’s an easy place to tell people about your relationship with Jesus. And as we do that, it increases our own faith.”

Laura Preston, who is one of the co-leaders of the toddler group, said: “We have a real heart for the members of the group, and they keep coming back. We have made real relationships with them and we expect that we'll outgrow this room!”

And Paul Thwaites, who started the regular pub quiz in the Eastfield Hotel in nearby Prince Albert Road, said, “I really like like I belong. There is the freedom here to try things, and I feel like I”m part of the family.”

In her sermon, the Ven Joanne Grenfell said: “This is a significant milestone for you, and so many things have happened in your church and community to give thanks for. As the Church of England locally, we are trying to do new things to bring the gospel afresh to new generations.

“We believe that God renews his church, and we may need to let go of some things that we cherish so that God can make new things grow in their place.”

Worshippers also paid tribute to the Rev Jeannette Hayward, who was part of the original team from St Jude’s that launched the new congregation, and who was ordained this summer. She had sadly died the month before the anniversary service.