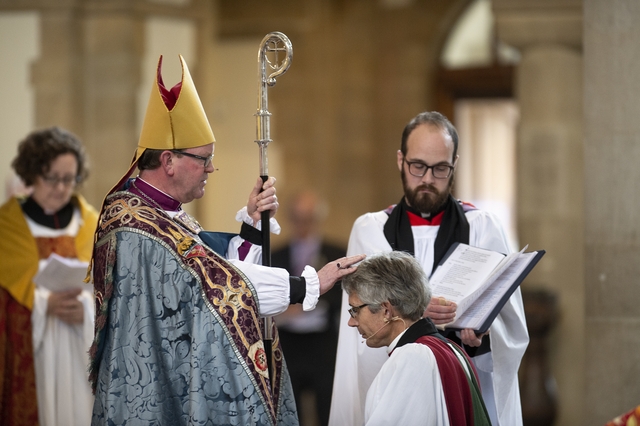 IT was a service full of formal ceremony, faithful prayer and soaring melodies, as the new Dean of Portsmouth was installed.

The Very Rev Dr Anthony Cane became Dean at a special Evensong in our cathedral, which included his collation, induction and installation. Bishop Christopher led the formalities, with a packed congregation of civic dignitaries, community representatives and supportive churchgoers.

In his sermon, he talked about the underlying issues in today’s society and how a cathedral community was well-placed to make a difference.

“Our wrangles over Brexit are but one aspect of deeper underlying issues to do with economic and social inequality,” he said. “Those inequalities can lead to social distance, as the elite becomes removed from the masses. But in church, everyone is equal before God.

“A cathedral can be a place of hospitality, where all are welcome, whatever their background. I would love the cathedral to do more to explore what ‘the Common Good’ and ‘mutual flourishing’ actually mean, and how that transforms into the lived experience of our communities.

“Part of the answer is to rediscover one of the lesser-known fruits of the Spirit – self-control. We have to listen attentively and behave courteously. As I join you as Dean, we must seek to live together with kindness, self-control and patience, in the interests of mutual flourishing and the Common Good.

“I will, of course, also get things wrong, so I need your help to learn from that and to find out how to do better next time.”

The Dean-designate started the service alongside clergy and choir members from Chichester Cathedral, outside the west door. His former colleagues processed up the aisle and presented Anthony to Bishop Christopher.

Anthony then swore an oath of allegiance to HM the Queen and to his new bishop, before signing the legal documents in the presence of our diocese’s Chancellor and registrar. Bishop Christopher then stretched out his hand and prayed a prayer of blessing over Anthony, as he knelt before him.

The second formal part of the service involved the Archdeacon of Portsdown, the Ven Joanne Grenfell, officially giving him permission to minister in the cathedral parish. She led him back to the west door and placed his hand on the handle, symbolising the fact that he would take possession of the building as the vicar of St Thomas’s Church.

The churchwardens presented him with keys to the building and a map of the parish, and Anthony then rang the cathedral’s bell to signal the start of his new ministry there.

And the third formal part of the service, his installation, involved Anthony making a declaration of obedience to the statutes and customs of the cathedral. He was helped into his new cathedral cope by Canon Nick Ralph, before being physically installed into his new stall. Acting dean Canon Peter Leonard led him to his new seat, which would symbolise his place within the cathedral’s College of Canons.

Bishop Christopher then introduced Anthony to civic, naval, ecclesiastical and other dignitaries in both the quire and nave of the cathedral before Anthony delivered his sermon.

Members of the cathedral, diocese and local community led prayers before Bishop Christopher and the new Dean blessed the congregation.

Anthony’snew role will see him leading the clergy and lay team at Portsmouth Cathedral, working alongside civic and political leaders in the city, and enhancing its role in the local community.

Anthony is married to Clare, a teacher, and they have three grown-up children. He succeeds the Very Rev David Brindley, who retired as Dean in summer 2018.