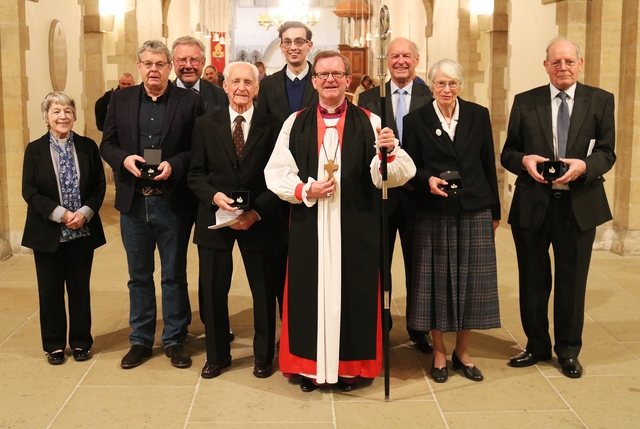 ELEVEN faithful worshippers have been honoured for their service to the Church and their local communities.

Bishop Christopher presented the stalwarts with a St Thomas Award to mark their commitment during a special Evensong at Portsmouth Cathedral.

It is the fourth year that the bishop has rewarded churchgoers across our diocese with this award, which is named after St Thomas a Becket.

Bishop Christopher said: “They remind us that the Christian life in its fullness reflects that of our Maker and Saviour. These wonderful people inspire us to find our inheritance in God, as they have. They have found their true selves, not in rewards of this world, but in Jesus Christ.”

Among the recipients was John Matthews, the former coroner on the Isle of Wight who is part of the congregation at St John’s Church, Newport. He has been organist there for 39 years and part of the choir for 50 years.

He now chairs the group that is seeking to transform the church building and its grounds to be more effective in mission and community engagement.

The Rev Di Netherway, from Northwood and Gurnard, is another long-serving member of the Church. She has been chaplain at St Mary’s Hospital on the Isle of Wight for more than 20 years, visiting weekly and helping with Sunday worship monthly.

She voluntarily goes on call when the chaplaincy is short-staffed, and serves faithfully in her parishes too.

George Westcott is also from the Isle of Wight. At 29, he is one of the youngest churchwardens in the diocese and has also been playing the organ at St Boniface, Bonchurch, since he was just 16 years old. He was described as having a huge pastoral heart for both the church and the local community, illustrated by his devotion as a full-time carer for his mother.

Two churchwardens from the same parish were also recognised for their commitment during a difficult few years there. Christopher Morrison and Tony Harris were churchwardens in Warblingon-with-Emsworth when a previous rector was suspended.

Christopher led the PCC during that time and ensured that the parish continued to function, and prepared the parish for the new rector. Tony also selflessly gave his time and energy to serve the parish over those three years, and agreed to serve an extra year as churchwarden to provide consistency.

Bishop Christopher said: “Their loyalty to their parishes in painful and demanding circumstances was exemplary and selfless. Their commitment and wisdom is something I shall never forget.”

Fred Mant has been a dedicated member of St Wilfrid’s Church, Cowplain, since 1953. He has been in the choir since 1960, and also co-ordinates the team of servers. He helps to take patients to the church service at the Queen Alexandra Hospital, and has also served as a leader of cubs and scouts.

He is verger of St Wilfrid’s, caretaker of the church halls, and an active member of the prayer ministry teams. He also actively supports the local Foodbanks. At 90, he is the oldest recipient of this year’s St Thomas Awards.

Elizabeth Hawkins, from Hawkley with Priors Dean, has worked selflessly to help both the church and wider community. She has been a Reader since 2005 and village hall trustee. She has been on the PCC for 28 years, including nine years as PCC secretary, has been on the church flowers and cleaning rota for most of her time in Hawkley, and does extensive pastoral visiting.

As a former teacher, she has organised the parish’s Sunday School groups and children’s workshops, and set up a valued mothers and babies group for the community. She also leads parish walks and has written a guide book of walks so that others can enjoy them.

Reader Phil Rutt has been instrumental in the growth and development of ministry with families in St Paul’s Church, Sarisbury Green. He also masterminded the oversight of the building of the church’s new extension.

He was primarily nominated for the St Thomas Award for his work with Fareham and Gosport Basics Bank, which supports thousands of families each year who are in desperate need. He acted as chair of the Basics Bank for a number of years. He visits schools and other groups that make donations.

Three of the recipients were not able to be in the cathedral to receive their St Thomas Awards from the bishop. Eileen and Barrie Jones were abroad, as they often have been recently, promoting marriage and supporting Christian groups in Africa, Pakistan and elsewhere.

They have been part of the Time for Marriage team since 1984, wrote the book When 2 Pray in 2004 which has been translated and published in seven countries, and first started travelling abroad to teach on the subject in 2007. Eileen was also the founder of Positive Parenting in 1995, and her material is still being used today. They have also been house group leaders at their church, Church of the Good Shepherd in Crookhorn.

And Barbara Holbrook, from St Mary’s Church, Carisbrooke, was unable to make the trip to the cathedral. She has held a host of parish roles, including being a Reader, churchwarden and Bible study group leader. Her ministry has involved many years of pastoral visiting and leading funerals, and in her 80s has continued to offer respite care to those who need it.