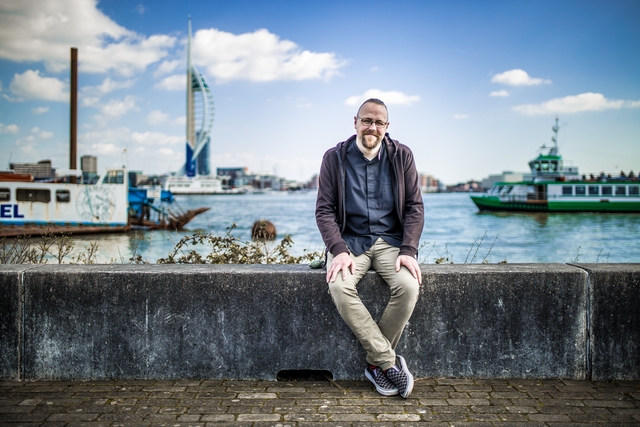 IT’S a sunny spring afternoon on England’s south coast. In Leesland, a densely-packed area of 1920s and 30s terraced houses near the centre of Gosport, there is the steady hum of people mowing their lawns. Washing flaps in the breeze. Two small boys play football in the road.

Leesland is a community of 11,000 people, living in an area where the Navy once provided all the work. Now it doesn’t so much. The employment tide has gone out. The levels of deprivation have risen.

Tucked into a corner in the far end of Leesland is St Faith’s Church. Built in 1890, it was originally intended to be a mission to the allotmenteers who planted their cabbages and potatoes in long-ago-built-on plots.

In the 130 intervening years, it too has seen the tide go out, and was left with just 10 people in the congregation in 2017.

“It was quite a toxic atmosphere,” recalls the Rev Tim Watson, Leesland’s Pioneer Minister. But the church gave itself four options, including closing. It opted to hold its traditional services on a Thursday and open the church up the rest of the time for whatever was needed.

Now, the tide is coming back in in a flood. The toddlers’ group is packed, oversubscribed with a waiting list. Every month there is a children’s clothes swap, where you can bring five items of clothing and swap them for five others. There’s a Trash Café which uses unsold food to make tasty dishes for locals.

All of this is advertised clearly outside the redbrick, one-storey building. And, if you want to go to church on a Sunday, this is now called Leesland Neighbourhood Church, and can, according to the banner, be attended at 4:30pm.

But not today. It’s Lent, and the congregation has taken itself even further out into the community than normal, meeting in a café on the harbour front. Twenty-three people, ranging from primary school aged children to retired grandparents, sit round a long line of tables, chatting, eating cake and drinking coffee.

Among the congregation is Matt Walker, 47, a regular at the Sunday gatherings and a keen cook, when group meals are required.

“I thought church was stuffy, lost in the past, unwilling to move,” he says. “I thought it was there to serve the people who were there and so alienated new customers. But this is friendly and open. It’s a community who are working to create something together. It’s not a reimagining of what was there. Traditional church stops at the door, but this doesn’t.”

Matt has an idea for an exercise for those who, like him, are living with cancer. Tim Watson beams. “We have the hall, he has the ideas.” And so it is that the church has come to serve its local community, and be rooted in it.

“This church was dying,” says Tim. “But now it’s flourishing, in terms of reach, in terms of the community. I met a woman who never used to come into the church building. Now she’s there up to three times a week, for things like the toddler group and the clothes exchange that we run. She told me how friendly it was. That’s exciting. We were about to close and now, two years on, we are at the point where we need to do a building project because there’s so much going on.”

The amount going on is evident in the church. Clothes rails, laden with children’s clothes, jostle among the pews. A small corner is partitioned off for other activities. The congregation received £5,000 in funding from the Church of England over three years, to help establish some of the new activities.

Three generations of one family sum up what’s happening here. Sixty-nine-year-old Sharon Ludbrook has attended the local Catholic church for the last 30 years. But she comes to the Neighbourhood Church in the afternoon. “This has a wonderful sense of community,” she says. “I can talk to people about my worries.”

Her daughter, 40-year-old Rebecca Knight, gave up attending Mass aged 16. When she met Tim’s wife Clare at the school gate, she was intrigued by the idea of a community church, came along and now is a regular attendee. “It’s wonderful. I have a big sense of wellbeing after going,” she says.

And finally, her granddaughter Eve, aged eight, has been coming to church with her mum for the last year. “It’s really good fun,” she says.

People tell part of the story. Numbers tell another part. The Sunday congregation has gone from 10 to more than 30. And it’s interesting to know a little bit about those people. Half of them, Tim says, previously had no connection with the church. Twelve per cent had been to church at some stage in their lives. And the rest were churchgoers.

Then there are the big festivals: 65 people attended at Easter, 170 at Halloween, 40 sat down to a Christmas dinner together.

Twenty-five children and a further 25 adults attend the toddler group. The Trash Café started to open its doors to 30-40 people once a week. It grew so popular that it regularly fed 400 people. “It was just insane. There were people queuing outside the door,” says Tim. But it’s now settled down to a “much more manageable” 60-100 people per week.

“What I love about this,” says Tim, “is that it’s not a top-down vision. It’s about listening and finding out what’s needed. It’s really exciting.”

This is just one of many projects supported by the Church of England’s Renewal and Reform programme, aimed at creating a growing Church for all people and for all places. Find out about some of the latest projects here.