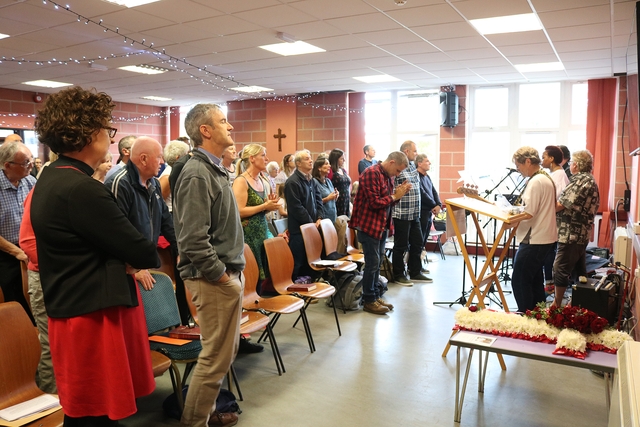 WOULD you like to help design the inside of a church building? Could you help a congregation work out how their building could serve their local community?

That’s the offer on the table from St Margaret’s Community Church in Eastney, who would love you to meet the architects who will draw up plans to refurbish the interior of their building. They’d like to hear what local residents are passionate about, and how the church building can become the centre of that local community.

Come and meet them at St Margaret’s Community Church on Highland Road between 2pm and 5pm this Sunday (April 28th). There will be a bouncy castle, Scalextric tracks, a coffee booth and a chance to see the inside of the building, which has been mostly closed since 2015 because of safety concerns.

There will be a chance to sit down and talk face-to-face with architects from Studio BAD between 2:30pm and 3:30pm. And then at 4pm, St Margaret’s congregation will hold its normal Sunday worship service inside the church building for the first time since 2015.

The church was allocated around £350,000 from the national Church of England before Christmas to refurbish the building and to transform its interior. It has also invested around £50,000 of its own money to make the physical structure safe again.

Worshippers have some ideas about using the building as a base for small businesses and community activities. They’re already hosting a bicycle repair workshop, which will be the base for a ‘Boris-bike’ project to provide loan bikes that can be used across Portsmouth. They would like to open a community shop and also have a community food store that will be available 24/7 outside the building for anyone in need. And they’d love to host regular youth events too. But they are keen to hear what local residents think first.

Fran Carabott, who leads St Margaret’s Church as its lay pioneer minister, said: “We have been worshipping in the church hall since September 2017 and the congregation is now so large that it’s difficult to fit into that space. And our children and young people have to meet in the foyer of the hall, as there’s nowhere else to go.

“So we’re really looking forward to being able to worship in the church itself for the first time. And it seemed like a good opportunity to open up the building to local people. Most of them won’t have been inside the church for years. I’m sure they’ll be fascinated to see the repairwork we’ve done already, but we didn’t want to get any further with our vision without talking to them first.

“I’m sure that local people will be able to think of things that we would never have dreamed of, and I’m really pleased that our architects are open to all kinds of suggestions.”

St Margaret’s Church in Highland Road was closed in 2015 because its roof leaked, its windows needed repairing, and there was a danger of plaster falling from the ceiling. Former worshippers held their final service in its church hall in December 2015, as they were unable to use the church building.

In September 2017, a new congregation – including 15 core members from nearby St Jude’s Church, Southsea – started worshipping regularly in that church hall. That ‘church plant’ has now grown to around 70 regular worshippers, including some who previously didn’t go to church anywhere. Work to repair the church building started in January 2019.

They have been able to appoint Darren Bray from Studio BAD as church architect. With his collaborate Professor Roger Tyrrell, they champion the concept of ‘Meanwhile Architecture’, which enables large projects to happen incrementally with the support of a local community.

The relaunch of St Margaret’s Community Church is just one of several new worshipping communities being created in Portsmouth diocese as part of its ‘live, pray, serve’ strategy, which aims to deepen the faith of worshippers, help them to engage better with their local communities, and enlarge their congregations.