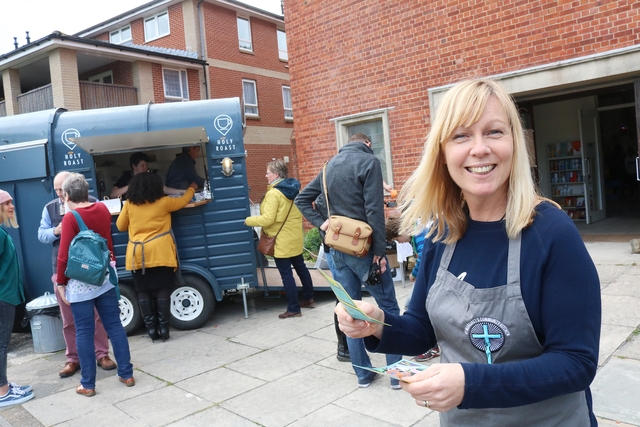 PORTSMOUTH South MP Stephen Morgan has thrown his weight behind plans to transform the inside of a church building to serve its local community.

The MP was one of many who visited St Margaret’s Community Church on Highland Road, Eastney, as it threw open the doors of its church building for the first time in more than three years. The building was closed in 2015, and has only just been declared safe after recent structural work was completed.

Worshippers invited local residents to meet architects who are drawing up plans to refurbish the inside of the building. Local families were invited to see what has already been achieved, and to share ideas on how the church can become the heart of the local community.

MP Stephen Morgan said: “My grandparents were actually married in this church, but it’s the first time I’ve ever been inside. The building has huge potential to serve a part of our city that often gets forgotten.

“This has been a good opportunity to hear what local people are saying about the place of the church within their community. I take away a sense that this church can show compassion to meet the needs of local people, and I’m impressed by the way that the church is already reaching out to them. It has my full support.”

The afternoon started with free coffee and cake being offered to passers-by from a coffee booth outside the church, as well as a ball pool, Scalextric tracks, inflatable games and Nerf gun challenge for families inside. Worshippers were able to show off their community shop, and the bicycle repair workshop that are already operating within its premises.

Architects Roger Tyrrell and Darren Bray, from Studio BAD, then invited people to split into different groups and dream up ideas for what they’d like to see offered from the building. Ideas included a café, play area, Foodbank, and a base for social enterprise – as well as being a place of healing and sanctuary.

The architects promised to take away all the ideas and to return with firmer plans that members of the local community could examine in a few weeks’ time.

Then the congregation of St Margaret’s Community Church – who have been worshipping in the church hall since September 2017 – were able to hold their first Sunday worship service in the church building.

Among those attending were Trevor and Pauline Brown, who were married in St Margaret’s Church almost 50 years ago. They were called to the front to tell the congregation about their wedding day, and promised to return on the day of the actual anniversary itself.

And among other local people who popped in during the day was mum-of-two Claire Inness. She said: “Because we live locally, I found out what was happening and was interested in discovering what the plans were. I was really pleased to hear the church would stay open as a church, and that it would have such a community focus.”

St Margaret’s Church was originally closed in 2015 because its roof leaked, its windows needed repairing, and there was a danger of plaster falling from the ceiling. Former worshippers held their final service in its church hall in December 2015, as they were unable to use the church building.

In September 2017, a new congregation – including 15 core members from nearby St Jude’s Church, Southsea – started worshipping regularly in that church hall. That ‘church plant’ has now grown to around 70 regular worshippers, including some who previously didn’t go to church anywhere. Work to repair the church building started in January 2019.

The relaunch of St Margaret’s Community Church is just one of several new worshipping communities being created in Portsmouth diocese as part of its ‘live, pray, serve’ strategy, which aims to deepen the faith of worshippers, help them to engage better with their local communities, and enlarge their congregations.