Worshippers to mark 75 years since D-Day 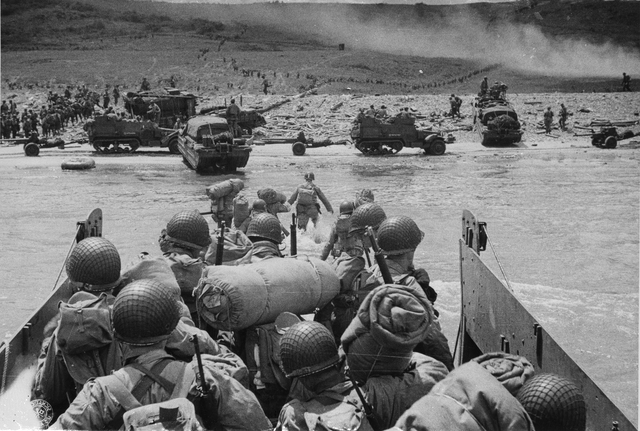 WORSHIPPERS will mark the 75th anniversary of D-Day with a series of services, events and concerts.

Churchgoers will be among those marking 75 years since the launch of the military operation that hastened the end of the Second World War and liberated Europe.

Christ Church, in London Road, Widley, has a unique role in the history of D-Day. The commander-in-chief of the British Second Army, Lieutenant General Miles Dempsey, had his main headquarters at Fort Southwick, and was supervising the build-up of hundreds of ships and landing craft in Portsmouth’s Naval Base and in the Solent, as well as military equipment across south Hampshire.

He was a devout Christian, so he chose Christ Church as the venue for an Eve of Battle Dedication Service with senior officers and headquarters staff, before the start of the largest sea invasion in military history.

The Vigil Service was arranged for the evening of Sunday 4th June – the night before the original date for the invasion – and included Lt Gen Dempsey dedicating to Almighty God the task before them. For reasons of secrecy, locals weren’t allowed to attend, but the church was full to overflowing with soldiers.

So at 7pm on June 4th, 2019, Christ Church will recreate that historic service 75 years on, in tribute to the British, Commonwealth and Free French soldiers of the Second Army. Worshippers will use hymns, prayers and readings that were used in the 1944 service.

They’ll also see the two memorial stained glass windows which were donated by Gen Sir Miles Dempsey as a thanksgiving for prayers answered. He returned to Christ Church on June 6th 1948 to unveil them as a permanent legacy of the church’s role in D-Day.

On Sunday 9th June, Christ Church will also host its special parade service at 10:30am, attended by veterans, uniformed organisations and service personnel. It holds this service every year on the Sunday nearest the anniversary of D-Day.

The night before D-Day, the 24,000 Allied Forces made their way across the Channel to prepare for their landing on the Normandy beaches on June 6th 1944. Many of the ships gathered the night before in an assembly zone south-east of Ventnor on the Isle of Wight.

On the evening of June 5th this year, the liner MV Boudicca, which has been chartered by the Royal British Legion to carry 300 D-Day veterans to Normandy, will stand off the coast of Ventnor. It will be accompanied by a Royal Navy warship escort and pause for 20 minutes before sunset.

This will give people in Ventnor the chance to mount a series of commemorative events along the foreshore, to acknowledge the presence of the veterans and the special role of RAF Ventnor, the Royal Navy’s Y station, with RAF St Lawrence and GCI Blackgang, in support of Operations Maple and Neptune as the prelude of Overlord.

It was vessels from Trinity House that had laid marker buoys across the English Channel on June 5th, 1944, to help the invasion fleet navigate its way to Normandy. And radar and listening stations in Ventnor and neighbouring villages provided a constant watch for Kriegsmarine and Luftwaffe movements and guided the Allied response to these.

The commemorations at Ventnor will happen between 8:45pm and 9:15pm on the evening of June 5thy this year, and will include the sounding of the ship’s horn, church bells being rung across Ventnor, commemorative prayers at the rotunda bandstand on the esplanade, the chance to create D-Day objects in the sand at Ventnor beach, and music from 1944. This event has been organised jointly by Churches Together in Ventnor and the Royal British Legion.

Two special concerts will also be held in churches in our diocese. St Mary’s Church in Fratton, will hold a concert at 7:30pm on June 8th to mark the 75th anniversary of D-Day, with a visiting choir from Caen in Normandy. It will be called Veni, Vidi, Canto and also feature the St Mary’s Church Choir, the Fine Voice Academy, 1940s performer Becki Short, the Oasis Community Choir and the Haven Community Choir.

And Portsmouth Cathedral will host a D-Day anniversary concert on June 20th, featuring Portsmouth Cathedral Choir, the Portsmouth Grammar School and other school choirs in a concert of British and French music. The evening starts at 7:30pm and includes a stirring performance of the Saint-Saens Organ Symphony from cathedral organist David Price and the Solent Symphony Orchestra. Tickets are £10 and can be booked via www.portsmouthfestivities.co.uk