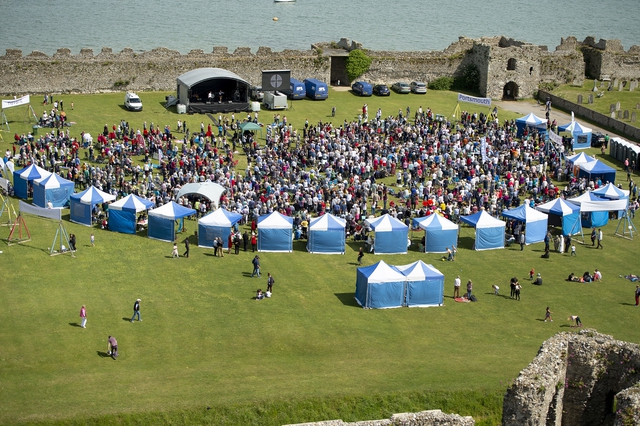 THOUSANDS of Christians of all denominations gathered in the grounds of Portchester Castle to pray and worship together.

The Big Prayer Picnic was the climax of the global Thy Kingdom Come initiative in our region, marking the end of 10 days of prayer individually, in churches and with ecumenical partners for local people to come to know Jesus. The initiative – which was launched by the Archbishops of Canterbury and York – now involves people praying in 65 denominations in 114 countries around the world.

Our three-hour Pentecost Sunday event was a mix of creative prayer, family-friendly games and sharing a picnic, followed by worship and prayer led from the main stage. It came at the end of 10 days of prayer since Ascension Day in churches, church halls and people’s homes across this region.

Bright sunshine greeted worshippers as they made their way from the car park into the grounds of the 1,000-year-old historic castle. They placed rugs on the grass, set up chairs and opened up their hampers to enjoy an open-air Sunday lunch. Children queued up for a mechanical rodeo bull, played crazy golf, had their faces painted, and took part in jousting. Families also joined together in teams to play games organised by Spirit in Sport.

Worshippers were also able to interact with around 20 gazebos scattered around the site, each offering prayer in a different style. They were able to draw pictures of those they were praying for onto stones, reflect on icons with incense wafting nearby, be anointed for healing, weave threads together to reflect prayers being joined together, and try out monastic chanting. Experienced Christians were on hand to guide worshippers through prayer styles they might not have been familiar with.

Then the 90-minute worship and prayer time began with a word from Bishop Christopher, and music led by a contemporary worship band. They led the 2,500 crowd in praising God using traditional hymns and contemporary songs, with the words flashed onto a big screen. A video message was played from the Archbishop of Canterbury, and three relatively new Christians were interviewed – each with the local churchgoer who had helped lead them to faith.

Hosts the Rev Andrew Hargreaves, our mission development officer, and Katherine Message then led worshippers in a variety of ways of praying together. Worshippers faced big banners emblazoned with the names of different parts of our diocese and each prayed their ‘best one-minute prayer’ for each place simultaneously. They got together in groups of three, four or six at different points to pray for topics chosen by a random generator on the big screen.

There were some formal responsive prayers, a time of silence when worshippers were invited to kneel in God’s presence, and the chance to pray the Lord’s Prayer in British Sign Language. The afternoon ended with a rousing version of Thine Be The Glory. Worshippers were commissioned to take the good news of Jesus to share it back in the places they had come from.

Worshipper Emily Best, from St John’s Church, Rowlands Castle, had brought her daughters Sophie, five and Alice, three. She said: “We are loving it. It's so nice to see lots of families having fun outside. There are lots of activities, and they were desperate to do the face-painting first. But they have painted some stones and will probably take them home to put on their window sill.”

The Rev Steve Sutcliffe, curate at Gurnard and Northwood on the Isle of Wight, said: “Coming together as God's family always brings me so much joy - seeing old friends and making new ones. To be able to come out of your parish, bring a picnic, relax, worship and pray together is fantastic. The part I enjoyed most was the 60-second prayers for each location, because I could imagine each place, think about what it going on there and pray for those things.”

And mum-of-three Marianne Matthews, from King’s Church in Portsmouth, said: “It’s great to be with 30 or so people from our congregation and also to be with our wider church family. It has been lovely for the children to have space to run around, play football while it has all been going on. I really liked getting together in small groups to pray with those who happened to be standing around us.”

Worshippers from the Isle of Wight were provided with a free coach to bring them over on the ferry, right to the castle. A team of volunteers helped to marshall parking in the 1,000-space car park next to the venue, and others were on hand to offer first aid if needed, dish out bottles of water and pick up rubbish. Caterers from St Mary’s Church, which is within the castle, offered hot dogs and other refreshments from their own tea rooms.

And Andrew Hargreaves suggested that next year’s ecumenical Thy Kingdom Come events in our region could involve stepping out in mission together, alongside praying for people to become Christians. For more photos from the Big Prayer Picnic, click here and here.