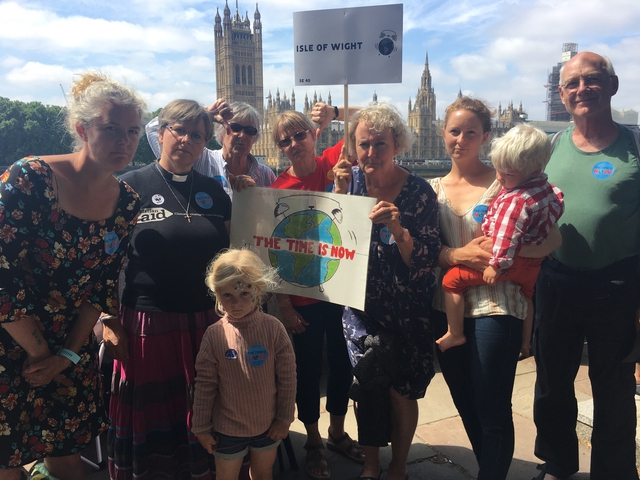 CHRISTIANS from the Isle of Wight were among those gathered in a mass lobby of Parliament urging MPs to make a stand against climate change.

The Rev Alison Morley and her group from the Haven Benefice, consisting of the churches of Yaverland, Brading, St. Helens and Seaview, were among the many Christian Aid supporters aiding in the movement, titled The Time is Now.

The group, part of the national Eco Church movement, converged with fellow islanders to meet with Bob Seely MP for the Isle of Wight by the banks of the River Thames. They hoped to encourage him to press for legislation that would protect the Earth and its people.

The assembly took place on June 26 and was the biggest mass lobby Westminster had ever seen. Over 12,000 protestors from various groups joined together in calling for urgent action on the climate emergency.

Alison’s group joined these protestors in calling on their local MPs to pass an ambitious Environment Bill, which set out strategies to reduce the UK’s carbon emission and thereby put a halt to the mass extinction of species and restore the world’s natural environment.

In the afternoon, the group joined the Climate Coalition campaigners, which consisted of groups as diverse as Surfers against Sewage and the Women’s Institute. In a united message, the campaigners all sounded their alarm clocks to the Parliamentarians to emphasise the urgency of their calls for change.

Alison said: “The earth’s alarm clock is ringing and our MPs have to wake up and take action. Life as we know it is at stake, these are unprecedented times and it is absolutely crucial for governments to take ambitious action to nurture our planet and its people. We are committed to being part of the solution in our local communities and are calling on the government to enact legislation that allows us to protect our local environments, reduce our impact on others and make the choices in our own lives that will reduce of consumption.

“I am a Christian Aid supporter. They work in 37 countries around the world and see what is happening now to communities and livelihoods because of our unlimited consumption of fossil fuels and resources.

“We simply cannot stand by and let this happen – people talk about the legacy we will leave our grandchildren, but climate change is already destroying lives.”