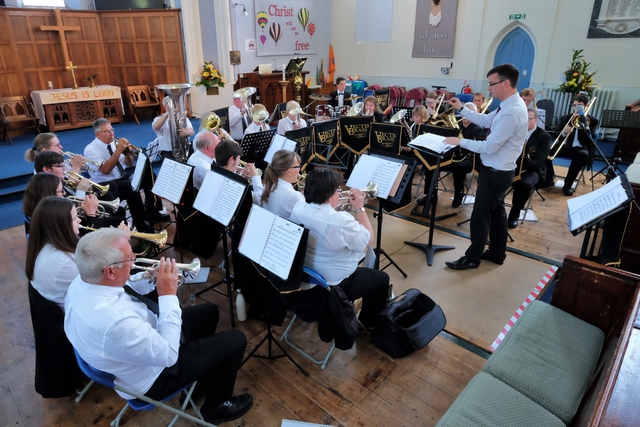 ST John’s Church in Newport achieved its ambitious goal of bringing together the cream of musical talent from across the Isle of Wight in one weekend.

Its music festival gave a platform to the broad spectrum of island music by musicians of all ages – ranging from sacred and classical to ukuleles, marching bands, instrumentalists and choirs and singers of different genres. There were 33 continuous performances over twelve hours from 10am until 10pm on the Saturday and 8am until 8pm on the Sunday.

IWSO Viola Quartet entertained with Around the world in 30 minutes – a light-hearted musical mystery tour. The eclectic repertoire of Quintisle mixed popular and classic and Marie Smith entertained on the saxophone.

Jazz was a strong component of the weekend with Martin Dover, who along with Jo, Director of Music at St John’s, masterminded the event with the unstinting support of many members and friends of St John’s. There was rousing appreciation of the musical jazz expertise of Cameron Tarry and Billy Halsey who, although only 16, kept the audience enthralled. Twenty fingers worth of jazz piano kept the audience entertained as Jim Thorn and Martin Dover shared and fought over the keyboard. Thirty people enjoyed a cooked jazz breakfast at 8am on the Sunday morning, while there was more serene harp playing by Nicola Walker over coffee after a special Sunday morning service themed on music with special speaker the Rev Dylan Turner.

A Recorder group, the Music Centre Jazz Band, Wind Band and the Isle of Wight Youth Concert Band displayed the talents of younger up and coming musicians, while organ recitals were given by Hallam Saunders, a Year 9 Music Scholar and John Matthews, organist at St John’s since 1980.

The building vibrated to the sounds of Trident Concert Band, Wight Diamonds Marching Band, Vectis Brass and the Latin American flavoured music of Toca Bonito. The Unity Stompers completed the first evening with their popular performance of traditional jazz music.

St John’s Choir started the weekend of music and led the singing at the final service of Songs of Praise with twenty chosen hymns and songs.

The weekend brought together a variety of musical talent, used the quality acoustics of St John’s Church, as well as raising funds for the St John’s 2020Vision project to develop the site as a community facility and its use as a musical venue.

Jo Dover, director of music at St John’s, said: “We are so grateful to everyone who worked so hard to prepare and deliver this weekend. The wonderful response was a symbol of the warmth and generosity of the Island musical community, showing a love of music and performance to share with all. It was a wonderful event. When everyone recovers we may well consider repeating it at some future time.”