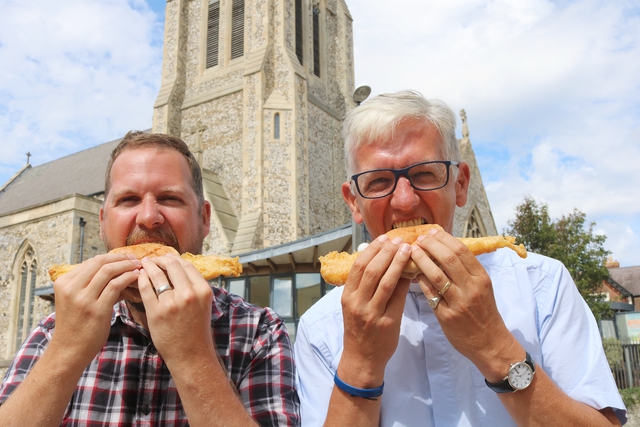 FIVE thousand battered fish in bread rolls will be handed out to visitors at a free fun day as a church seeks to replicate one of Jesus’s miracles.

Worshippers from St Jude’s Church in Southsea are leading other local churches in re-enacting the feeding of the 5,000 as part of a free community festival on Castle Field.

Members of the public will be handed the free food, along with a copy of the story of the miracle in comic-book form, which has been supplied by the Bible Society. The #Feeding5K event happens from 11:30am until 4pm on Saturday 7th September. It will be a reminder of the only miracle that is recorded in all four of the gospels.

This initiative, which was inspired by similar events organised by the Bible Society, is designed to encourage passers-by to think about whether Jesus performed miracles and whether he could transform their lives too. Twelve volunteers dressed as ‘disciples’ will be in charge of handing out the fish and bread, which will be cooked in three mobile vans.

It will be part of a massive free community festival on the Castle Field site, which will include live music, a samba band, talks, interviews, a kids’ zone, games, a refreshment tent, and more. There will be lots of free give aways - from Mark’s Gospels to knitted fish for the children. It is designed for anyone who will be visiting the seafront that day and also for Christians to invite friends and families along.

Among the musicians playing live will be the Bean Baker Band, who have previously played at festivals such as the Big Church Day Out, New Wine, Latitude and Soul Survivor; and award-winning indie singer-songwriter Jessie Dipper (pictured above), who has been described as the ‘female Ed Sheeran’.

Later in the day, there’ll be a special youth event in the same venue for 10 to 18-year-olds from 5:30pm to 8pm. Rap artist Hiddenman, who is from south London and has also played at New Wine, will be performing. There will also be pillow jousting, a bungee run, rodeo bull, sumo suits and food stalls.

St Jude’s is working with St Simon’s Church, St Margaret’s Church, the Vineyard Church, the Methodists and Kings Church in Southsea. Between them, they’ll have over 100 volunteers offering food, staffing stalls and chatting to passers-by on the day. Anyone who would like to help can come to a training event at St Jude’s on September 5th at 7:30pm. The event has been financially supported by the Love Portsmouth Fund and by the Diocesan Mission Opportunities Fund.

The church’s associate vicar, the Rev Neil Smart, said: “We want to put Jesus back at the centre of the life of our city by showing that he still does miracles among us today.”

The event comes as the climax to the parish’s Year of Mission, which has involved training in personal evangelism for members of the congregation, plus events such as a performance of the entire Mark’s gospel by worshippers.