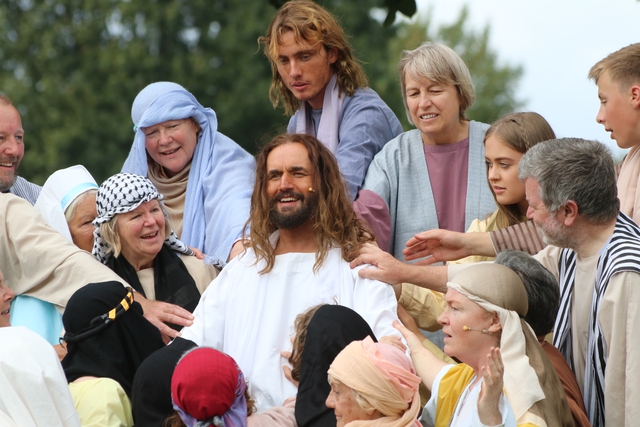 HUNDREDS watched an absorbing Passion Play in Havant that told the story of Jesus's life, death and resurrection.

Worshippers from churches across the Havant area are staging three performances of 'Behold the Man' in Havant Park over an August weekend. Shoppers and passers-by are stopping to watch the action unfold, as the cast of more than 50 Christians portrayed Jesus's miracles, healing and teachings - as well his final week in Jerusalem.

It's the third time in five years that churchgoers from Havant, Bedhampton, Rowlands Castle and Leigh Park have joined forces to tell the gospel story via a Passion Play in Havant Park.

Director James Burke-Dunmore had led the cast in exploring the Biblical stories through a series of workshops in rehearsal, before writing up this brand new script earlier this year. As in previous years, James himself played Jesus, though he took the interesting decision to allow those playing Jesus's disciples to recount some of the more dramatic moments in his life before his entrance in the second act.

The play opens with a boy possessed with a spirit, and with some of Jesus’s disciples attempting to exorcise the spirit, before they tell the waiting crowd how Jesus had called them, healed a paralytic, calmed a storm, fed 5,000 people and walked on water. Having been unable to cast out the demon, Jesus then returns from the Transfiguration to do so.

The play then follows Jesus’s entry into Jerusalem, over-turning of the money-changers’ tables in the temple, the Last Supper, and then Jesus’s trial, crucifixion and resurrection. There is also audience participation, as cast members come into the audience to hand out pitta bread during the feeding of the 5,000 scenes. The cast also dissolve into the audience as they are sent out by Jesus to tell the good news as the play ends.

Those shopping in the nearby Meridian Centre or getting off buses in the neighbouring bus station were amazed to see Jesus and two others being crucified in Havant Park – and an angel announcing to the women who came to his tomb that he had risen.

Volunteers manned an information tent, refreshment tent and prayer tent, offering further information and support to anyone who had been affected by the performance or wanted to know more. Havant’s town chaplains were also on hand to help those who needed it.

Two years ago, Havant churchgoers presented Jesus in the Park, which was a slightly different take on the gospel story. And back in 2015, they launched their series of Passion Plays with an initial performance in Havant Park.

To see more photos of the 2019 Passion Play, click here.