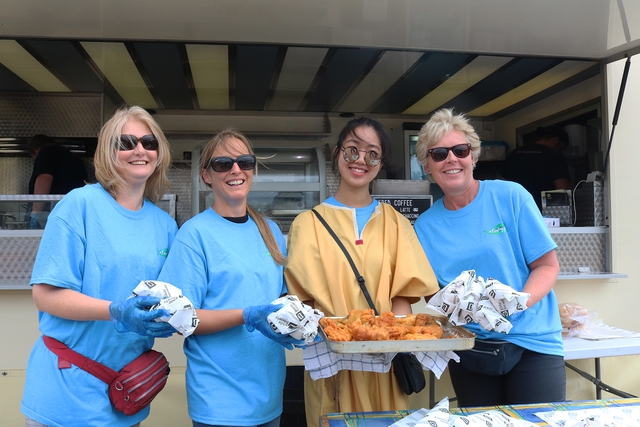 THOUSANDS of passers-by were fed as churches in Southsea joined forces to recreate a miracle.

The Feeding the 5,000 event aimed to help people understand what it might feel like for so many people to be fed simultaneously – like the Biblical story in which Jesus fed 5,000 people with five loaves and two fish. It took place as part of a free family fun day on Castle Field, with live music, games and kids’ activities.

Worshippers provided freshly-battered cod in bread rolls, cooked in three mobile catering vans on site, and handed out with the story of the miracle told in comic-book form. Around 4,000 people were fed in four-and-a-half hours, with a stream of curious passers-by stopping to discover more.

The day started with a samba band beating out a rhythm as they walked from St Jude’s Church, along Palmerston Road towards the seafront. Marshalls in hi-vis vests handed out invitations to shoppers, families and dog walkers to invite them along to Castle Field.

More than 120 volunteers in #Feeding5k t-shirts then handed out the fish rolls and chatted to guests, who were also offered hot drinks, biscuits and cakes for free. Families also had the chance to try on sumo suits for a wrestle, have their faces painted, design their own t-shirts and mugs, try pillow jousting and have a go at sports challenges.

Singer-songwriter Jessie Dipper entertained the crowds with a series of cover versions and original songs. The 20-year-old Christian musician from Birmingham said: “I had a wonderful time, and the people here are extraordinary. To be able to do this kind of thing in such a public space is a real accomplishment. I normally work in the mainstream music scene, so to be able to tell my story of faith here is really important.”

There was an interview with University of Portsmouth cosmologist David Bacon, who explained why he considered Christianity to be the most likely explanation of how our world works. The Bean Baker Band played later in the afternoon, with children dancing in front of the stage.

Sports activities were provided by Spirit in Sport, there was a talk by the curate of St Jude’s, the Rev Adam Denley, around 40 people asked for and received prayer. A total if 900 knitted fish were given away during the day, and some mums and dads faced a series of challenges including doughnut-eating and hula-hooping.

Mum Jane Walker had brought along her two-year-old daughter Lydia to join in the fun. She said: “It’s brilliant. It’s amazing that people can do things like this, as you don’t get much for free these days. It’s such a wonderful event, and our fish is lovely.”

And Toni Griffiths, from King's Church, had brought along her children Lorelei, 8, and Rory, 5. “We felt as though we should come along as we kept on coming across the story of the feeding of the 5,000. It is amazing to feel as though we are part of a similar miracle.”

Later on, there was a special youth event, which included music from rap artist Hiddenman, and a bucking bronco for teenagers to try. They got to eat hot chocolate and doughnuts, to play games, and to listen to a talk about Christianity.

The whole day was organised by St Jude’s, St Margaret’s and St Simon’s C of E churches in Southsea, as well as King’s Church, Portsmouth Vineyard, and the local Methodists. The remaining food was given to churches and charities who work with the needy and homeless to distribute across the city. Funding for the day came from our diocese’s Mission Opportunities Fund, among other places.