Churchgoers will help those struggling with debt in Fareham 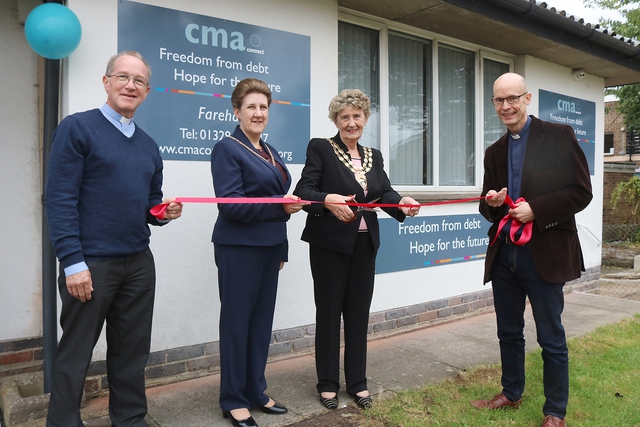 CHURCHGOERS have launched an initiative to offer advice to those struggling with debt in Fareham.

Worshippers from a variety of churches in the town and surrounding area have launched a charity called ‘CMA Connect, Fareham’, which will seek to help people worried about debt. This new initiative comes out of a concern about the hardship and hopelessness that having too much debt can bring to people’s lives.

Fifteen Christians from a range of different churches are working to make the new money advice centre possible. Ten of the group will become befrienders, offering face-to-face help to people to help them access free, confidential debt advice. The centre is based at St John’s Church Hall, Fareham.

The vicar of St John’s, Fareham, the Rev Bruce Deans, said: “Initially, the idea came from me thinking and praying about the community we live in, and I asked God what new way we, as Christians, could share his love with them.

“I was very aware of the hardship that debt can bring to people’s lives and began to do some research. I discovered that 32 per cent of Britain’s workers have less than £500 in savings, and that 19 per cent of children who are part of families with problem debt also face bullying at school. I also found out that some statistical analysis suggests parts of Fareham are among the 20 per cent most deprived category in the country.

“Problem debt is often a hidden burden with many detrimental implications for people’s lives. It can cause great worry and even despair, and it exists here in Fareham."

As part of his research, Bruce spoke to the local Citizens Advice Bureau, as well as other established debt advice charities such as Christians Against Poverty, Frontline, and Community Money Advice. When it came to doing something about this problem, there was no shortage of support from other churches, Christians Together in Fareham and neighbouring Church of England churches. Funding has also come from individual donations and groups such as the Allchurches Trust, Love Portsmouth, the National Lottery Community Fund, the Cinnamon Network and the Well Charity.

“We are here to support those worried about debt, whatever their circumstances, background or faith,” said Bruce. “We can help people to budget and to access free debt advice. And, at the end of the day, we’ve done this because we’re a group of Christians who believe that, even in the most difficult times, there is hope for the future. We really believe that.”

The charity 'CMA Connect, Fareham' was launched as the Mayor of Fareham, Cllr Pamela Bryant, and Mayoress, Cllr Louise Clubley, cut a ribbon at an opening ceremony attended by volunteers, churchgoers and representatives of the organisations that have supported the new centre. The Rev Bruce Deans, the Mayor, and the Archdeacon of the Meon all praised those who had helped the centre get off the ground.

The Mayor of Fareham, Cllr Pamela Bryant, said: "Fareham is a prosperous area, but there are pockets of deprivation, and the council is very aware of them. We should be looking after those less fortunate than ourselves. Thank you to everyone who has masterminded this, because it is absolutely wonderful."

And the Archdeacon of the Meon, the Ven Gavin Collins, said: "I'm pleased about four things: that the church here is seeking to serve the local community; that a detailed vision came from asking the community what it needs; that this involves churchgoers of different denominations across the area working together; and that this represents the manifesto that Jesus preached about - he talked about freeing people's chains and setting them free, and so often it is debt that holds people back."

The charity will be affiliated with the national charity Community Money Advice. For more information, see www.cmaconnectfareham.org or ring 01329-284837, or visit St John’s Church Hall, 5A Upper St Michael’s Grove, Fareham, PO14 1DN on Saturdays from 10am until 12noon. Unfortunately, the charity is not able to help the under 18s or the self-employed.