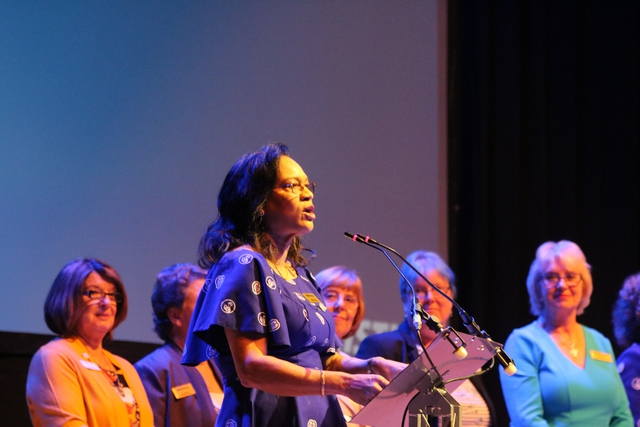 HUNDREDS of representatives of Mothers’ Union groups from across the UK – and beyond – came to Portsmouth for their annual meeting.

Around 1,000 delegates attended one of two Eucharistic services in Portsmouth Cathedral the day before their General Meeting in Portsmouth’s Guildhall. For more photos, click here.

And they heard from the new Worldwide President of the Mothers’ Union, Mrs Sheran Harper, who praised the praying power of millions of MU members, and their responsiveness to humanitarian crises around the world. The Mothers’ Union is the oldest and largest women’s movement in the world, and unites four million Christians in 84 countries worldwide.

Our cathedral hosted two separate Eucharistic services on the same day to cater for Mothers’ Union delegates who had come to Portsmouth from diocesan MU groups across the country. Around 600 attended the 3pm service and 450 attended the second at 6pm.

The Ven Anthony Cane, Dean of Portsmouth, led the first service, with musical support from the girl choristers of Cantate. The Ven Trevor Reader, chaplain to Portsmouth diocesan MU, led the second one, with musical support from the boy choristers of Portsmouth Cathedral Choir. The Deputy Lieutenant of Hampshire and Deputy Lord Mayor of Portsmouth attended the earlier service, and the Lord Mayor came to the second one. Sheran Harper read the lesson at the earlier service, and our diocesan MU president the Rev Elizabeth Groves led the prayers at the later service with Susan Baker, MU provincial president-elect.

Canon Angela Tilby, Canon of Honour at our cathedral, preached at both services, recalling the personal characteristics and committed Christian faith of the Mothers’ Union founder Mary Sumner – and comparing her with the Benedictine nun Hildegard of Bingen, whose feast day was being celebrated.

“Mary Sumner would be astonished by the way that our Christian heritage has disappeared,” she said. “But as people of faith, we can still make a difference. People from other parts of the world can inspire us. God doesn’t give up on us, and we shouldn’t give up on God.”

The next day, around 1,000 delegates gathered at the Guildhall in the centre of Portsmouth for a day devoted to discussing the work of the Mothers’ Union. Worldwide President Sheran Harper, who is from Guyana, addressed the conference, at one point asking members to high-five each other.

She recalled a visit to a prison in the UK where Mothers’ Union members were providing a safe environment for inmates to meet their wives and families. Volunteers would turn up with toys to allow children to play while husband and wife talked, and offered support at the emotional moments that children had to say goodbye. She also recalled the prayerful and financial response by members to crises around the world, such as bombings in Sri Lanka.

“Our members are strategically placed to transform the lives of families and communities thanks to prayer and generous giving,” she said. “In difficult times, we must be Christ-like and respond with compassion and love.

“What a joy it is to be part of a family that transforms hearts, lives and families in step with God. Let us go forward in recognition that we are the living hope of a loving God. I thank you, I love you and may God bless you!”

The general meeting also worshipped together, heard about specific MU diocesan initiatives that were making a difference, and saw a video message from their new Central Chaplain, the Rt Rev Emma Ineson, Bishop of Penrith. Over lunch, delegates were able to inspect resources around the building that might help them in their work. The Rev Barry Hill also spoke on the theme of ‘Working alongside the clergy and our call to discipleship’.

The Mothers' Union was founded 142 years ago by Mary Sumner, whose husband was rector of Old Alresford. She invited mothers of all classes to meet in her home for mutual support, and subsequently founded the Mothers' Union after addressing female churchgoers at the Portsmouth Church Congress in 1885. Members work as volunteers in local communities, putting their faith into action and helping to transform the lives of families through grassroots support, empowerment and challenging injustice.

For more photos from the cathedral service and General Meeting, click here.