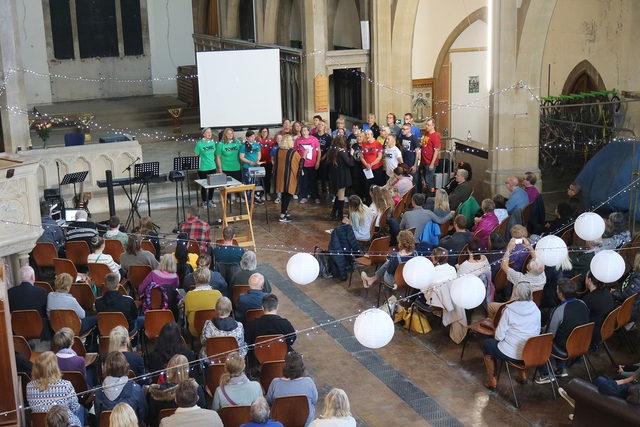 A NEW Portsmouth congregation celebrated its second birthday with songs, smiles and cake.

St Margaret’s Community Church in Southsea was created as an offshoot of nearby St Jude’s Church, when a team of 15 people started meeting in its church hall.

Two years later, more than 100 people crammed into its partially-refurbished church building for a celebration with Bishop Christopher. They were celebrating its growth from a tiny group of dedicated disciples to a thriving congregation, with its own community shop, worship band and toddler group.

The church invited the Tonic Ska Choir, which holds midweek rehearsals inside their church building, to launch and close their service with uplifting songs. The choir aims to help those with mental health issues to recover confidence by performing.

Congregation member Neil Cater, who plays harmonica in the church’s worship band, gave his testimony of becoming a Christian in Liverpool. He was part of church choirs that sang at the funerals of Liverpool fans who died in the Hillsborough disaster in 1989.

“Family is very important to me, and I’ve been part of church families in Liverpool, Durham, Sunderland, Lowestoft, Leicester and here in Portsmouth,” he said.

And the church’s leader, pioneer minister Fran Carabott, interviewed Bishop Christopher about his own journey of faith. The bishop also preached on Ephesians 1 before the congregation enjoyed birthday cake together.

St Margaret’s Church was originally closed in 2015 because its roof leaked, its windows needed repairing, and there was a danger of plaster falling from the ceiling. Former worshippers held their final service in its church hall in December 2015, as they were unable to use the church building.

In October 2017, a new congregation – including 15 core members from St Jude’s Church, Southsea – started worshipping regularly in the neighbouring church hall. That ‘church plant’ has now grown to around 70 regular worshippers, including some who previously didn’t go to church anywhere.

Work to repair the church building started in January 2019, and worshippers were able to hold their first worship services back in the church itself in April. Among the alterations made to the building is the creation of a workshop for the social enterprise Bicycle Recycling. It trains young people in bike maintenance, and accepts unwanted bikes to recycle them for sale here, or sends them to Africa.

Dedicated volunteers from the church also run a regular community shop and café there from 10am-2pm every Thursday and Friday, which allows people to donate unwanted furniture, clothes or household items for re-sale. Locals can also drop in for coffee and a chat, and some guests have started to come to church or signed up for Alpha courses.

They hold regular worship services, including activities for children, every Sunday afternoon at 4pm.

The relaunch of St Margaret’s Community Church is just one of several new worshipping communities being created in Portsmouth diocese as part of its live | pray | serve strategy, which aims to deepen the faith of worshippers, help them to engage better with their local communities, and enlarge their congregations. For more photos, click here.