‘I hate running – but I finished a marathon’ 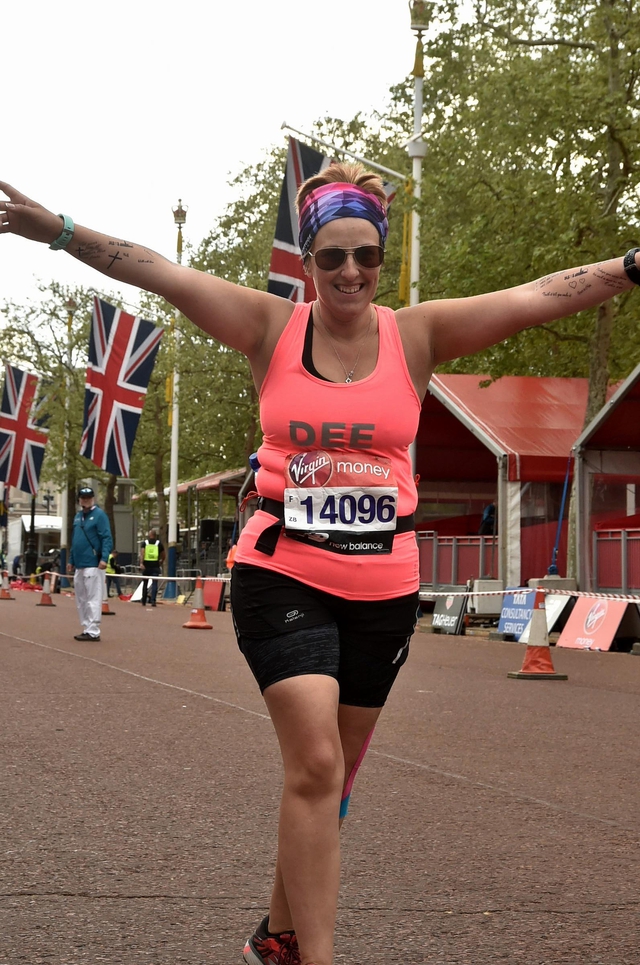 DEE Humphris surprised herself by completing the London Marathon – as she actually hated running!

The mum-of-two had entered an online ballot, not expecting to get a place. When she was successful, she initially wanted to refuse it. Then it dawned on her that she could run to raise money for her church – Christ Church in Portsdown.

She spent several months training, often in difficult weather conditions, but always trusting God. And when it came to tackling the 26-mile course around central London, she was even more aware of God’s presence. Now she feels she can tackle anything with his help.

“It taught me what you can do if you put your mind to it and with God on your side,” she said. “I hadn’t done any running before, and I hated it with a passion. It made my chest hurt and I hated being sweaty and hot. I was a slightly overweight 35-year-old with a post-natal tummy - and my husband said I could barely run the bath without some drama.

“Running that far was therefore so far outside my comfort zone, but it was definitely God and all the people who were praying for me who got me through all the training and the race itself. And completing the marathon has inspired me to do other things that I thought I might not be capable of.”

Dee wasn’t part of a churchgoing family, but always had an affinity with the Christian faith. She grew up as part of Brownie and Guide groups at St Nicholas Church in Bedhampton, and went to church at Christmas and Easter.

But three weeks after her first son Eli was born, a leaflet landed on her doormat advertising the Advent fair at her local church, Christ Church, in London Road, Widley. When she visited, she was overwhelmed by how welcoming the congregation was and was curious about people’s faith.

She started going to services, finding out more about Jesus, and went through the church’s confirmation course. Five years later, and she has become a committed disciple and deputy churchwarden. As she was part of the PCC, she became aware of some of the church’s financial needs.

For a few years, she had also entered her name into the ballot for the London Marathon, mostly on behalf of her husband, who would have liked to run it. She never really expected to get a place, so when she heard a year ago that her application for the 2019 marathon had been successful, she was initially embarrassed. Then it occurred to her that being sponsored to run could help out her church’s finances.

“It dawned on me in the early hours one morning that this opportunity was perhaps the answer to my prayers for the church’s finances,” she said. “It wasn’t quite what I was expecting for sure, and to be honest I was hoping for the church to maybe be awarded with a lottery ticket or a grant of some kind. But it appeared God had other ideas.

“I hit the accept link, paid my registration fee, and for the first time felt excited that in six months I’d be on the start line for the best marathon in the world. I couldn’t wait to show everyone what was possible with God.”

Dee started training in January and found that the hardest part about it was motivating herself to just get out of the house, as well as finding the time for it. She was already mum to Eli, aged 5, and Abel, aged 3, as well as working as an occupational therapist at St Richard’s Hospital in Chichester.

“I embarked on three or four runs a week squeezed in between childcare and work shifts, early starts, and long Sundays,” she said. “I ran in the wind, the rain, the wind and rain, hail stones, a little sunshine, and more rain. I saw sunrises, I saw sunsets, I ran in two degrees, and I hated nearly every second of it. However, I always ran alone and I started to enjoy the solace of being alone, listening to podcasts and just taking the time to pray.

“When I ran country routes, I felt free and closer to God through nature. I took time to appreciate the sea, the clouds, the birds, and the trees. Running in the city I felt claustrophobic and the miles took so long to tick by.”

After 16 weeks of training, she felt ready to tackle the 26.2-mile marathon course. She had asked specific churchgoers to pray for her as she ran each mile – and she prayed for each of those people as she ran.

“My plan was to take the training seriously but just enjoy marathon day,” she said. “I certainly enjoyed it and took my time to suck up the atmosphere and the sights.”

Among the highlights of the run was a point in Greenwich where a crowd was stood outside a building playing drums. She was drawn to their energy, and realised the crowd was from a church that was also called ‘Christ Church’. Her husband Robin also popped up in five different places along the way to spur her on.

Towards the end, she started to hit the notorious marathon ‘wall’, and was finding it difficult. She felt like she was running in treacle and wanted someone to pray with her.

“I came around the final corner by Buckingham Palace and someone shouted my name,” she said. “It was a girl from my work, who I didn’t know very well, but I happened to know she was a Christian. I couldn’t believe God had provided someone who could pray for me, and I asked her to do so. It showed me again that God would answer my prayers in ways I wouldn’t expect – this work colleague had just decide to go to London to support the marathon runners and didn’t even know I was running.”

Dee crossed the finish line and realised that she had raised more than £2,000 for her church, which will be spent on roof repairs and resurfacing the drive.

“I was too exhausted to cry, but I was elated,” she said. “It was an emotional moment, but the main thing was that I’d never thought I could run that far. God strengthened me and it was a privilege to do what God entrusted me to do.”

Dee has no plans to embark on another marathon but returned to London earlier this year to compete in a two-mile open-air swim.