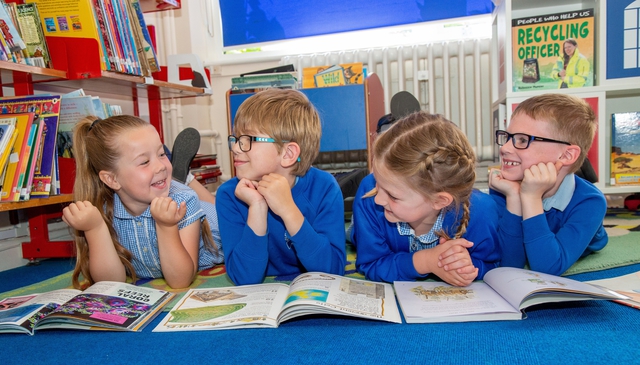 STAFF, parents and children at a Church of England school in Fareham are preparing for a new era.

St Columba C of E Academy in Tewkesbury Avenue is set to welcome a new sponsor as it seeks to further improve pupils’ academic development and wellbeing.

But because the DCAT is a larger trust, it has more resources to help the school to tackle issues such as academic achievement, leadership and the quality of teaching. These are areas that a local authority would normally advise and support on, but in an academy, the responsibility falls on the sponsoring academy trust.

Principal Tracey Marsh said: “I’m excited for the future of our school, and look forward to working with the new trust. We have already started building a relationship with them.

“We’ve already made much progress since our last Ofsted report. But I’m confident that these new arrangements will help our school to improve still further in those areas that Ofsted identified.

“The Diocese of Chichester Academies Trust has a track record in helping schools like ours to turn around, and there is a good deal of experience to call on.”

And Jeff Williams, director of education for Portsmouth diocese, said: “We would acknowledge that PWDAT has not, as a sponsor, been able to invest as much in terms of resources into St Columba Academy as we would have liked. Partly that’s because of the size of the trust itself.

“This move gives the school community the chance to work with a larger trust that has a strong team with a proven track record. It also has a Christian ethos, which is important for this school. We want to do what’s right for parents, pupils and staff, and we’re confident that this is the right way forward.”

The school, which was formerly known as Oak Meadow C of E Primary School, became an academy in 2012. It is one of four schools currently sponsored by the PWDAT – the others include one in the Winchester diocese and two on the Isle of Wight. St Columba C of E Academy now teaches around 160 four to 11-year-olds.

An Ofsted monitoring report in October suggested that the school was making progress in the three areas of improvement outlined in its inspection in April 2019 – the quality of teaching, its leadership and management, and the management of behaviour. The leadership of Mrs Marsh was praised for taking the school in the right direction.

The Diocese of Chichester Academy Trust (DCAT) is currently made up of seven schools, six of which are primary. It has two schools located in Chichester, less than half an hour from Fareham.

Central C of E Academy in Chichester joined the trust after being placed in ‘special measures’ in 2016. Following successive positive Ofsted monitoring visits, it achieved ‘requires improvement’ in March 2019 and was judged ‘good’ for leadership and management, and for pupil behaviour and welfare.

Four of the trust’s six primary schools are in Hastings in East Sussex, an area of significant deprivation. Despite the challenges, the trust’s performance in primary schools is strong and significantly above the national average. A total of 74% of 11-year-olds reach expected standards in reading, writing and maths, compared to the national average of 64%.