Homeless people will sleep in churches again this winter 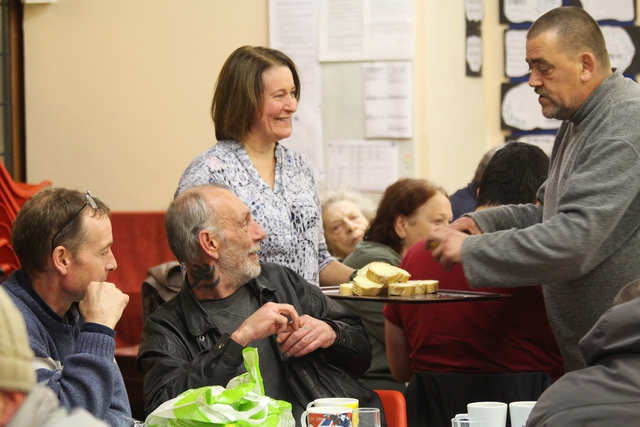 HOMELESS people will be invited to sleep inside churches in Portsmouth for the third winter in a row - and churches in Gosport are to launch a similar scheme.

Worshippers have responded to the growing homelessness crisis, which has seen the number of people sleeping on the UK’s streets doubling between 2010 and 2017, and a record number of homeless people dying in the past year. And that’s not counting those who end up sleeping in hostels, on friend’s sofas, or in bed and breakfast accommodation – none of whom have somewhere they can actually call home.

Among the regular ways our churches have been helped homeless people is Sunday Suppers at St Simon's Church, Southsea. They have been cooking meals each week for almost 30 years for those who are homeless or isolated, or who are living with addiction or mental health issues. They use donations of food from other churches and local cafes and supermarkets, and build relationships with those who come regularly.

Another regular event is Friday Fridge at St Jude's Church, Southsea, which also welcomes those who are homeless, lonely, or dealing with mental health issues. Volunteers offer hot drinks, bacon sandwiches, cheese toasties and the chance to socialise late on a Friday night. It recently marked its 13th anniversary. Read more about it here.

Over the past two winters, worshippers across Southsea have also welcomed homeless people to sleep in their church buildings during the coldest months of the year.

This winter, they’ll run their Open Church project again, with 12 people sleeping inside St Swithun’s RC Church, Kings Church, Immanuel Baptist Church and Eastney Methodist Church each night from February 3 until March 1. Open Church will be run again in partnership between Caritas and the Society of St James, a Hampshire-based charity that helps homeless people throughout the year.

Churches in Gosport will also open their doors each night for two months as part of a similar scheme. Their Open Doors project will build on the existing food run that already offers food to the dozen or so rough sleepers in the centre of Gosport. Churches Together in Gosport are working with Gosport Borough Council to offer them hot food, a safe place to sleep, and breakfast, from January 6 through to February 29.

Project leader Phil Rutt, from St Paul’s Church, Sarisbury Green, said: “We hope that we can open our doors to those who are the most vulnerable – the core rough sleepers in the centre of Gosport. They’ll come inside our churches for a meal, the chance to chat with our volunteers and each other, and a bed for the night.

“These projects also offer volunteers from the community an opportunity to seriously engage with the rough sleepers. From the shared meal and relationship building, rough sleepers can be encouraged to re-engage with services and make some life changing decisions.”

And Kevin Gallagher, director of Caritas in the Roman Catholic Diocese of Portsmouth, who will run the projects in both Portsmouth and Gosport, said: “We don’t see those who sleep rough as an issue or as a problem that needs to be solved, but as individuals, each of whom comes from a different situation and has a story to tell.

“We want to create an environment where people feel a bit more human. Anyone who wants to volunteer will be given appropriate training, so they’ll understand our procedures. This will be a pilot scheme, and will help us as we try to work out how to serve them better once this specific project has finished.”

In both Portsmouth and Gosport, each church will offer beds for the night on certain days of each week. Churchgoers can volunteer to cook meals for their guests in the evening; sleep in the church overnight alongside those who are homeless; or help with breakfast in the morning. Folding beds and bedding are then transported from one church to the next each day.

The project leaders have already held a recruitment evening in Gosport, which was addressed by Gosport MP Caroline Dinenage and the Gosport Mayor Kathleen Jones, which enabled everyone to hear about the project more fully. But more volunteers are needed and everyone is welcome - those of any faith and of no faith.

There are meetings for those interested in volunteering for the Gosport scheme on November 25 and December 2 in St Mary's RC Church, in the High Street, Gosport. Anyone who is interested should email gosportopendoors@gmail.com or phone Kevin Gallagher on 07388-994057.

There is also an evening for volunteers who would like to help with the Portsmouth Open Church scheme. It takes place at 7pm on December 5, at St John's RC Cathedral, Edinburgh Road. The project has enough beds and bedding, but any donations will be used to help the project's guests. For details of this, please also contact Kevin Gallagher on kgallagher@portsmouthdiocese.org.uk or 07388-994057.

Find out more about our churches' response to homelessness