Vicar is part of community that saves people’s lives 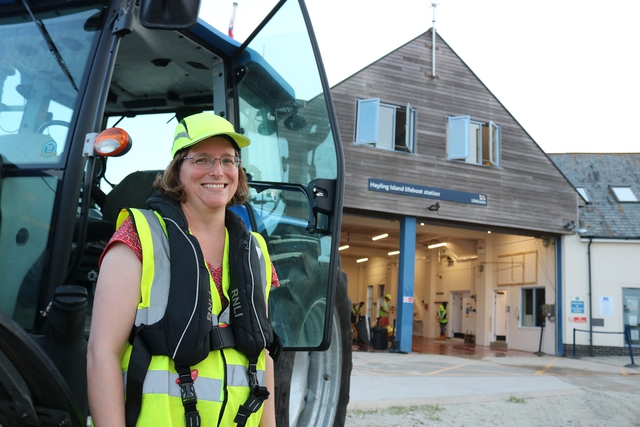 IT is a real community where people feel a sense of calling and are committed to serving others. That sounds like the local church, but it’s actually a description of the volunteers who staff the lifeboat station on Hayling Island.

Those volunteers include shopkeepers, health professionals, business people – and the local vicar. And at any moment, they may need to drop everything, drive to the very tip of the Eastoke peninsula, prepare a lifeboat and launch it into Chichester Harbour.

Although it is often the Boat Crew who get the glory, as they rescue a walker from a sandbank or pluck a sailor from the choppy waters of the Solent, supporting them is a team of Shore Crew who make it all possible.

On average, Hayling’s RNLI lifeboat team are called out around 80 times a year, and in 2018 they rescued 61 people, including five children, as well as three dogs and 25 vessels. When you add in regular training exercises every Sunday morning and Wednesday evening, that’s quite a commitment.

But for the Rev Jenny Gaffin, vicar of Hayling Island, it’s all worthwhile. “Becoming part of the Shore Crew team has been life changing,” she said.

“In addition to the privilege of playing my small part of saving lives at sea, I’ve made wonderful new friends, begun to learn a whole load of new skills, and got to know the community on Hayling so much better.”

When there is a ‘shout’ or when the boats are on exercise, the Shore Crew team prepare one or both of the two lifeboats for launch. They help ensure the safety of members of the public and crew during launch and recovery, when the boats are driven across a public beach. They also maintain the boathouse, keep records as shouts unfold, support the Boat Crew on their return, and help with any casualties who are brought ashore, if needs be.

Jenny is also being trained to drive the tractor that physically carries the lifeboat from the station to the water’s edge before any rescue can take place, and recovering it from the water when it returns. On a shout they aim to launch the lifeboat within 10 minutes of the initial call, so the adrenalin can often be pumping.

The 47-strong team includes educators who save lives by helping people to stay safe in and around the water. The team also includes mechanics and people in fundraising and administrative roles.

Shore Crew and Boat Crew are divided into three ‘watches’ – red, white and blue – and each watch is on call for one week out of three.Between 7am and 7pm, whoever is available responds to a shout. They wear a pager, which could go off at any time, and they aren’t allowed to leave the island when on call, just in case.

For Paul Cobon, who is the Red Watch leader, it’s not always easy to drop everything. He works as a dental technician, so may be with patients when the alarm is raised. He has been part of the shore crew for six years.

“My father-in-law was on the Boat Crew, so he always talked about it,” he said. “But it almost felt like I had a sense of calling to this lifestyle too. I kept finding myself standing behind people with pagers who were responding to callouts. I came to an open day, had a look and decided to join.

“No one gets paid, so people are here because they want to be. At 55, I was too old for the Boat Crew, but I’m very happy to help out as part of the Shore crew.”

Janet Denman, 48, has been part of the Boat Crew for 18 months. Although she’d always wanted to do it, it was only when she moved onto Hayling Island that she lived close enough to help.

“It is nice to be part of an extended family,” she said. “It is such a close-knit community, and we get a lot of satisfaction from what we do. Every incident can be a life or death situation.

“The busiest time tends to be at low tide, when people do get trapped on sandbanks, but it can be a boat that is in difficulties, or a swimmer, or even a child who is lost on one of the beaches.

“It is great to have Jenny involved. She’s just a normal member of the team, but she also has very good empathetic qualities that probably come from being a vicar. She thinks of things others might not have thought about.”

And Sharon Swan, 47, who owns a convenience store near the lifeboat station, is one of the few who can usually be available during the daytime. She’s been part of the Boat Crew for six years and has now qualified as the station's first female helm in its 103 years of existence. She is one of just 50 female helms across the UK are Ireland.

“I’m working one minute down the road, so it’s easy for me to get here,” she said. “I love it because you feel as though you’re doing something good, and you meet great people. We do let Jenny off being here on a Sunday morning, as she has other commitments then, but it’s good to have her involved.”

Hayling Island originally had a rowing and sailing lifeboat from 1865 until 1924, when the station was closed as motor lifeboats were taking over the rescue work. In the 1950s and 1960s, the number of incidents led to the setting up of a private rescue service. The Royal National Lifeboat Institution (RNLI) re-established a lifeboat in Hayling in 1975 and a new station was built at Eastoke.

That station was rebuilt in 1995 and extended in 2007, and now houses two lifeboats – a larger Atlantic 85 called ‘Derrick Battle’ launched by a tractor called ‘Betty’, and an inshore D-Class called ‘Jacob’ launched by tractor ‘Gwendoline’. They respond to emergencies throughout Chichester Harbour, and along the Solent towards Selsey or Portsmouth.

Volunteers turn up for the regular exercises on Wednesdays and Sundays, as well as other training sessions, and fundraising at church fetes and other events. The youngest volunteer is a trainee aged 18 and the oldest is in his late 70s.

The Hayling RNLI team is currently short of shore crew and boat crew, and are looking for others to volunteer and train. If you live on the south of Hayling and you’re interested in finding out more, please contact them via www.haylinglifeboats.org.uk.