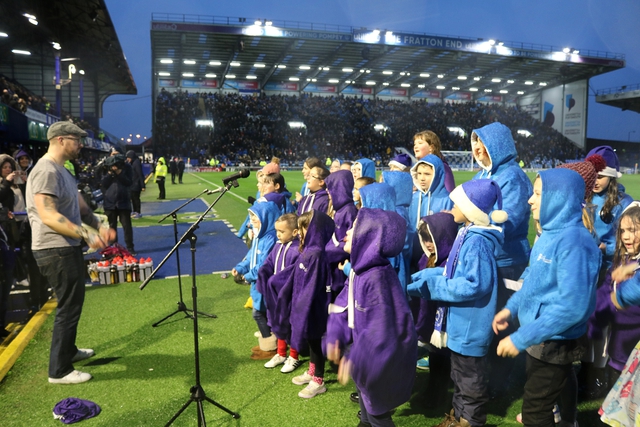 IT was an amazing occasion as schoolchildren sang a brand new song in front of 19,000 fans at a Pompey football match.

The children delivered the world premiere of the ‘Pompey Chant’ at half-time during Portsmouth’s match against Ipswich Town. They stepped onto the turf at Fratton Park to perform in driving rain during the club’s final home match before Christmas.

The children are all part of Choir Church, a brand new worshipping community that is being created around a children’s choir, based at St James’ Church in Milton. Fratton Park – the 120-year-old stadium that is the home of Portsmouth Football Club – is within the parish of St James.

Members of Choir Church were invited to be part of the matchday entertainment by the charity Pompey in the Community. The 20 or so singers and their teachers were able to watch the Division 1 match from close to the pitch before and after their performance.

Musical director Alastair Ross conducted the choir, which includes pupils from Milton Park Primary School and Meon Junior School, in singing two songs during the half-time break. The pupils lined up near the managers’ dugouts in matching hoodies, and sang their hearts out, despite the incessant rain. Fans showed their appreciation with claps and cheers.

Crystal Griffiths, aged 11, from Meon Junior School, said: “It was a little bit nerve-wracking, but it was also exciting to sing in front of that many people. But I think we were focussed on what we were doing.”

And classmate Maggie Frazer, 11, said: “It was really good to be on the pitch, and it was really fun. Choir Church is good because it gives you these kind of opportunities.”

And headteacher Sara Paine said: “It was an amazing opportunity to sing in front of so many people. I think some of them were nervous, but when they started singing, they were fine. For many of them it’s their first time even at a football match. I'm very proud of them, and proud that the rain didn’t put them off, even though they got soaked.”

Musical director Alastair Ross has spent the past few months recruiting children from local schools to create ‘Choir Church’. The pupils rehearse regularly, and the idea is that their families ultimately form a new worshipping community. Choir Church members have performed at the 75th anniversary of D-Day event in the summer, and at significant services at St James Church. And just a week before this event, they sang to a packed crowd in the Fratton End of the stadium as part of Pompey’s official carol service.

‘The Pompey Chant’ was written by the founders of Out of the Ark Music, Mark and Helen Johnson, and is based on ‘The Portsmouth Song’ and the ‘Pompey Chimes’. Members of Choir Church recorded the song for an EP earlier in December at Out of the Ark’s studio. The recording is available via YouTube and other platforms aiming to encourage community and intergenerational singing.

Alastair said: “It was a wonderful experience hearing this song resounding around Fratton Park. Singing and chanting at matches is a real opportunity to express enthusiasm, emotion and support, and the choir instilled that enthusiasm around the stadium. Performing at the hub of Pompey’s community has been a great time to be able to share and nurture the concept of community and intergenerational singing. We hope the excitement will encourage not only the schoolchildren of the choir to continue singing, but the rest of the crowd at Fratton Park.”

And Helen Johnson said: “We were able to bring together timeless songs and chants from the rich Pompey history, and create some original lyrics that will hopefully generate pride in the Portsmouth community and a spirit of excitement in singing. We hope they encourage people to gather as a community and engage all generations to sing together.”

Meanwhile, Pompey’s players made it an even happier occasion as they rounded off a 1-0 win against high-flying Ipswich Town on the pitch.