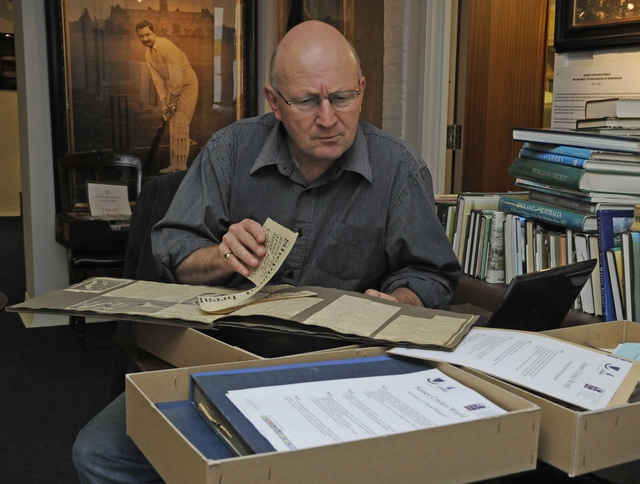 IT was a chance conversation that led Andrew Bradstock to write a biography of one of the highest profile bishops of the 20th century.

Andrew, who worships in the Haven benefice on the Isle of Wight, was chatting to the daughter of Bishop David Sheppard, the former Bishop of Liverpool. He mentioned his surprise that no one had ever written her father’s biography. Before too long, he was given the job!

Five years later, Andrew’s book – Batting for the Poor – has just been published. It was based on interviews with around 100 people, and contacts with another 250, as well as sifting through 66 box files of his private papers and archives at places he was connected with.

And it seemed appropriate that Andrew should be the person to write about a bishop who was known for his passion for social justice. His own life has involved exploring the intersection between the Christian faith and politics too.

“Bishop David Sheppard was someone who was committed to exploring how faith should impact on how we live as a society, who had something to say about the issues of his day such as homelessness, racism and unemployment,” said Andrew. “He was a pioneer in his own day in suggesting that an evangelical expression of faith should include involvement in these issues.

“And as my faith developed, I could understand where he was coming from. I’d started with a faith that was mostly concerned with personal salvation, but began to realise that faith wasn’t just an internal thing, but should have an impact on society.”

Andrew, who is now 64, grew up in a Christian family, worshipping at a Strict Baptist chapel in south London. He benefitted from intensive study of the Bible from an early age, and being given a chance to preach and pray out loud. But he also felt restricted by rules dictating what Christians should or shouldn’t do.

“I was aware that my lifestyle was different to other people at school,” he said. “For instance, I played football with my friends in the week, but then had to make up reasons why I couldn’t play with them on Sundays. In my early 20s, I developed a condition that would now be called obsessive compulsive disorder (OCD). I don’t think it was because of my faith, but the idea of a judgemental authority figure being ready to strike me down didn’t help.”

Andrew got through the worst effects of his OCD, although he still struggles with aspects of the condition. However, he left school at 16, before getting the results of his O-levels, and chanced upon a civil service administrative job that kept him going for the next 10 years.

In 1981, at the age of 26, he was engaged to a student at Bath University, and was considering enrolling himself at nearby Bristol. The wedding didn’t happen, and the subsequent trauma led to a crisis of faith. But he decided to study for a theology and politics degree there anyway. That was a turning point.

He discovered academic theology, liturgy and the Church of England at this time, as well as an emphasis on how the Christian faith could help to transform society.

“Once the pieces of my faith had snapped apart, I was never going to put that jigsaw puzzle back together in the same way,” he said. “But I found a fresh way to follow Christ. I came to appreciate C of E liturgy, I valued public confession, and I enjoyed the fact that we celebrated Communion weekly. Academic theology also opened up new questions for me.”

He studied for a Masters at Bristol, and then a PhD at the University of Kent, spent some time in post-doctoral research in New Zealand, and then took up academic roles teaching at La Sainte Union College in Southampton and then at King Alfred’s College, Winchester.

His work involved exploring the Church’s renewed emphasis on social justice, something he was able to put into practice when appointed Secretary for Church and Society with the URC in 2000.

Andrew wrote several books examining how Christian faith has inspired political and social change, both historically and today. His books look at Reformation in Europe in the 16th century, the English civil war in the 17th century, the Sandinista revolution in Nicaragua in the 1980s, and contemporary church responses in the UK to poverty, peace-making and climate change.

In 2008, he co-authored Moral, But No Compass: Government, Church and the Future of Welfare with Elizabeth Paulhus and Francis Davis, who was the founder of our Cathedral Innovation Centre. Among other things, this study suggested that the Church had a mistaken assumption that its role in society was understood.

Andrew was 49 when he married Helen, and moved to Ryde on the Isle of Wight to be with her. Helen already had two children from a previous marriage, and Andrew has now become a step-grandparent. After another stint in New Zealand, this time setting up a centre for public theology, the couple settled in St Helens, and started worshipping in the village’s parish church.

“We’ve really got involved in the benefice,” he said. “We can see that the vicar, Alison Morley, is inspiring the congregations to think deeply about their faith, especially on issues such as the environment, which I think David Sheppard would have approved of.”

And it was back in 2014 that Andrew happened to be talking to David Sheppard’s daughter Jenny about a project she was developing. He mentioned that the bishop’s biography had never been written, and Jenny said she and her mother had never found the right person to do it. When Andrew said he was passionate about cricket, as well as effective Christian engagement in the public square, she was interested in taking it further.

“Jenny and her father’s literary executor, Canon Godfrey Butland, grilled me one evening in a restaurant in Liverpool, did some due diligence and asked me whether I’d like the job,” he said.

The book takes in David Sheppard’s early life and his time at Cambridge University, where he set a series of batting records which have never been beaten. He went on to captain his university and Sussex cricket teams, and remains the only ordained minister to play Test cricket for England. In 1954 he captained his country for two tests against Pakistan. He refused to play against South Africa in 1960 because of its apartheid policy.

Having been dramatically converted to Christ at university, David Sheppard was ordained in 1955, became Bishop of Woolwich in 1969 and Bishop of Liverpool in 1975.

The book details his pioneering ecumenical work alongside the Roman Catholic Archbishop of Liverpool, Derek Worlock, and his partnerships with community groups, businesses and many others to promote social justice. Bishop David wrote several books, including three jointly with Archbishop Derek, and was a driving force within the commission that published Faith in the City.

Andrew said: “I have the blessing of the family, so in that sense the biography is ‘authorised’, but that doesn’t mean I have written what they wanted. I have allowed myself to be critical at times. But it is also true that he is an inspiring, driven figure, who pioneered today’s philosophy that the Church should work in partnership with others to achieve transformation of our society. And he remains an inspiration to me.”

Batting for the Poor is published by SPCK, and is priced at £19.99. You can buy a copy here.