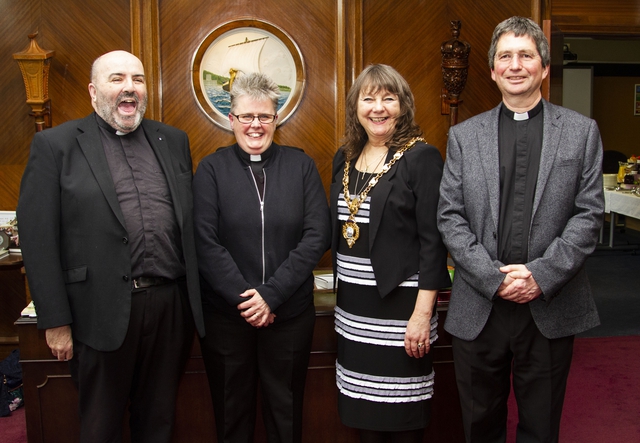 THE Mayor of Gosport has formally thanked three clergy from Gosport for their care for those in the local community over the years.

A reception and presentation took place on February 25 in the Mayor's Parlour at which the Rev Andy Davis, Canon John Draper and the Rev Karen Mitchell were all thanked by the Mayor of Gosport, Councillor Kathleen Jones, for the pastoral care that they had all undertaken during their ministry at Gosport.

They were joined by honorary freeman, alderman and past mayors who they had served as Mayor’s Chaplain or been involved with as part of other civic events. They joined the Mayor in thanking the three clergy for the work that they had carried out in roles with the Scouts, Royal British Legion, town twinning, local schools and arranging and conducting civic, carol and Remembrance services in Gosport spanning many years.

They were each made an Honorary Chaplain Emeritus to Gosport Borough Council and presented with crests of the borough by the Mayor, in appreciation of their service to the Borough of Gosport. She also said they would all be sadly missed.