“I learnt to trust God more on African trip” 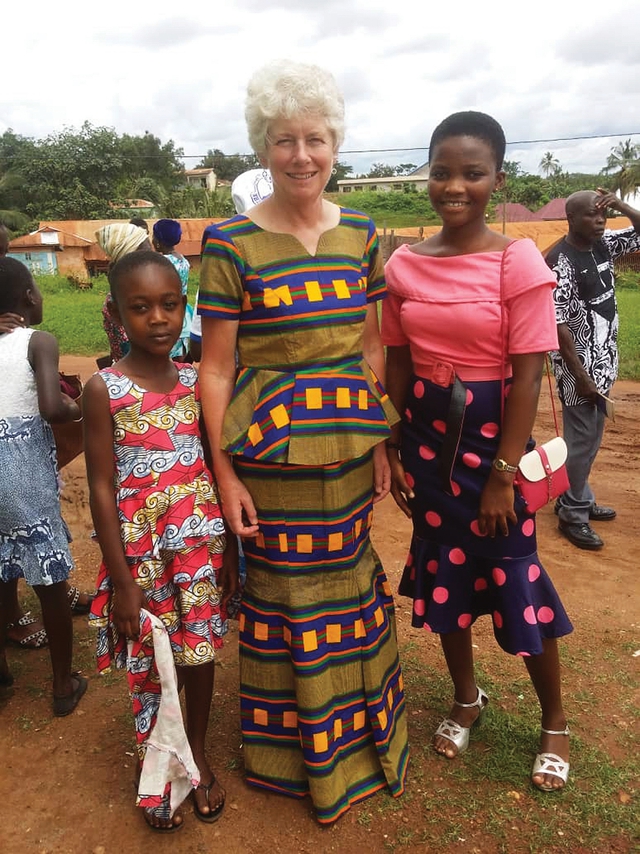 IT was a chance for Liz Quinn to step out of her comfort zone – and to place herself entirely in God’s hands.

She spent a month working in a small parish in a remote region of Ghana as part of her training to become a Reader in the Church of England. It was a world away from the leafy village of Hambledon, and the traditional worship of St Peter and St Paul’s Church, where she normally attends.

It also meant she experienced being hosted entirely by Ghanaian churchgoers. Worshippers from St Matthew’s Anglican Church in Awaso provided for her every need, despite not having much themselves.

“I was aware right from the start that this was about placing myself in God’s hands, trusting in God,” she said. “That’s one of the big messages I came away with after my time in Ghana.

“I also experienced my own vulnerability as a guest. I journeyed simply, in the spirit of Mark 6, where Jesus sends his disciples out with nothing for the journey. Ghanaian hospitality is very generous. The guest is the most important person in the home. Nothing is too much trouble.

“I lived with the parish priest, Fr Dickson Denteh, and his family, who provided all my meals, gave me a comfortable room and organised for my washing to be done. He went out of his way to give me a rich experience in the church and wider community. His family shared their home with me, and the church community welcomed me wherever I went.

“There is something about always receiving rather than giving that made me feel vulnerable. The people of St Matthew’s experienced vulnerability through their economic poverty. That vulnerability broke down barriers. It opened us up to friendship, and Christ’s presence between us. Love was in that vulnerability.”

Liz, who is a mum of two and a grandmother, had worked as a secondary school teacher, teaching RE to students at Oaklands RC School in Waterlooville. She’d joined the congregation at Hambledon Parish Church nine years ago, choosing to say Morning Prayer there daily, and she became a spiritual director within our diocese.

She felt a calling to formal ministry within the Church of England after many years involved with pastoral work in the community, helping families to prepare for baptism and running specific programmes. Liz was accepted onto the Portsmouth Pathway, which is our local course to train clergy and Readers side-by-side.

Towards the end of the three-year course, trainee Readers have a month-long placement, usually in a parish within our diocese. Liz felt God calling her abroad after hearing a talk from the director of mission from mission agency USPG. She realised that our diocese’s links with Ghana could make it possible for her to visit a church there, and USPG and our own Inter-Diocesan West Africa Link (IDWAL) provided funding and advice.

Hambledon is part of the Bishop’s Waltham deanery, which is linked with the Ghanaian Diocese of Wiawso, in the west of the country. So her placement was organised with St Matthew’s Church, Awaso, within that diocese.

She flew to Accra in mid-September, travelling with the Rev Susan Allman – now IDWAL link person for Fareham deanery – to Sekondi. After a few days there as a guest of Bishop Alex Asmah, Liz was met by the priest-warden from St Matthew’s. They caught an early morning bus together north to the small rural town of Awaso.

“It’s a very remote area, seldom visited by foreigners,” said Liz. “Many people are subsistence farmers, growing crops such as cocoa, maize and plantain. Others are employed at the bauxite mine in the forested hills above the town. People are very poor.”

She was met and hosted by Fr Dickson Denteh, the recently-appointed priest of St Matthew’s, which also has six outstation churches across the locality, including one that meets in a classroom. On her first Sunday, she travelled to St Luke’s, Kojina, for the Communion service.

“The tradition is Anglo-Catholic, but in an African context,” she said. “The music is a mix of Church of England hymns sung slowly in English, with African songs and dancing. The African music brings a joyful vibrancy to the service.”

She joined Fr Dickson on some pastoral visits, praying for individuals in simple homes. He had also organised a week of prayer, which included a three-hour healing and deliverance service, with plenty of singing and chanted prayers.

She also took part in funeral and baptism services, which incorporated local customs, such as gathering at the deceased person’s house the day before a funeral.

Liz also experienced some of the outreach groups based in the parish, such as the Mothers’ Union, Women’s and Men’s Fellowship Groups. And she saw the Anglican school next to the church which teaches children from two to 14 years old. Every Wednesday, the pupils came to church for morning prayer.

And, because Fr Dickson leads the ministry for young people in his diocese, Liz was also welcomed to a local revival service and met some of the young people who carry out mission in the remoter parts of the diocese.

“I am overwhelmed by the incredibly rich experience that I have had,” she said. “It has been and I’m sure will continue to be, a life-changing experience, not least in my future ministry.

“I hope to be licensed as a Reader this summer, and will serve in the benefice of Hambledon, Newtown and Soberton.