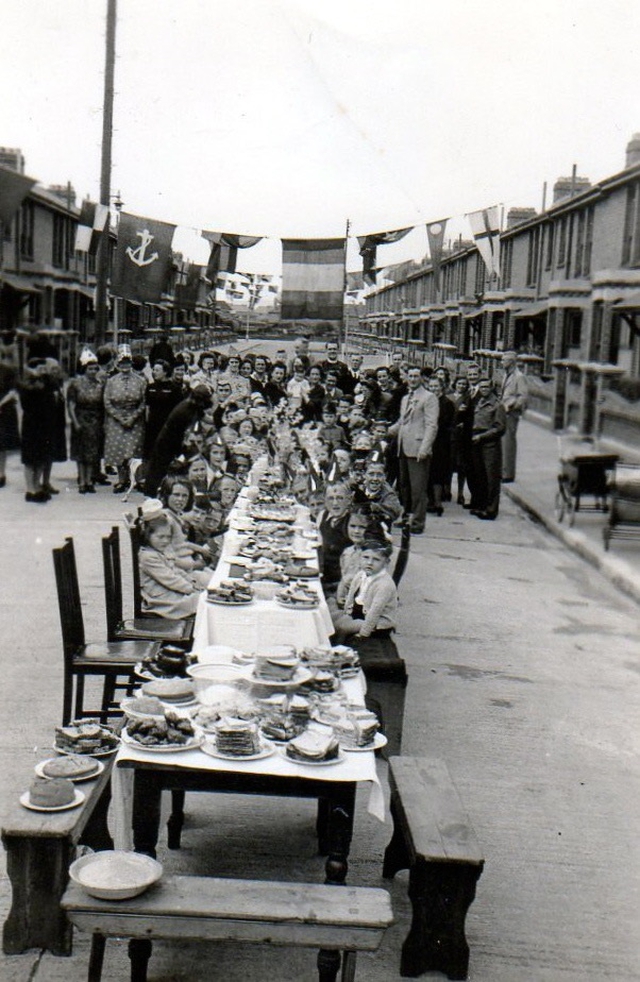 WORSHIPPERS from a Portsmouth church have shared their memories of VE Day in 1945, as we approach the 75th anniversary of the end of the Second World War.

Churchgoers from St James Church, Milton, recalled how Portsmouth was a front-line city during the war, while Milton itself was crucial in preparing for D Day. Some of the current worshippers still have vivid memories of the celebrations to mark VE Day.

Margaret Baber, now 86, has been connected with St James’ nearly all her life. She recalls that: “I was 11 when the war ended. I don’t know why, but my mother took us to Eastney Bus Depot, where an enormous bonfire burnt. There was singing and dancing around it. It must have been evening as everyone was quite merry. I was most intrigued as a soldier or Marine took off his jacket and threw it onto the bonfire. I always think of it when I go past.

“I can remember more when I was about six and hearing my parents saying war was coming. I prayed every night: ‘Don’t let there be a war’. During the raids, we used to go to bed under the stairs or in the shelter in two foot of water. We left our shoes and scarves on the table so we could put them on quickly. Later I realised the bombers weren’t coming and we were waiting for the end. But I had just started at a new school and that took up all my thoughts!

“I remember going to the Regal Cinema (on the junction of Devonshire Avenue and Milton Market) and seeing the newsreels of Belsen. I couldn’t believe it. It was absolutely terrible. I remember my first ice cream. My next door neighbour took us out on a tandem and we went to Hayling. It was lovely. I’ve never had an ice cream like it.”

David Warren-Holland remembers that: “I was 7 or 8 when the war ended. I can’t remember the announcement, but there was a street party on Shelford Road (pictured above, with thanks to David). Everyone contributed, bringing things to eat we wouldn’t normally have. We had rides on the horse and cart, owned by Mr Chisholm, the grocer, and effigies of Hitler and Mussolini were strung up from the lampposts.

“Earlier in the war, I remember running from Shelford Road to Edgeware Road, where my grandparents lived, when my mother panicked during an air raid. I remember seeing the planes going over on their way to bomb the Dockyard. Later I recall a V1 stop and drop on Locksway Road, destroying several houses. Afterwards you realise that you were a survivor and a lot of kids weren’t.”

Ann Kerle recalls that: “We lived in a row of cottages a way outside the village (Box in Wiltshire). I was five going on six and me and a neighbour’s child, Beryl, had measles. We had to stay in bed with the curtains closed; we used to write little notes to each other and my grandmother would deliver them. On VE Day, everybody put things up in the front of their cottages, which was lovely. We peeped out of the windows at the bunting.”

Joan Gray says that: “I was about 14. I felt very relieved that it was all over and our men could come home. But, to be honest, I don’t remember much. Having family in the forces we just used to switch off. We never knew what was going to happen. My oldest brother was a Captain on the Army Searchlights on top of the Hill and we worried about him. On VE Day, we celebrated in Warren Avenue – there was singing and dancing going on!”

Trevor Gray is Joan’s brother. He said: “I was only 5 or 6. But I remember the party on Warren Avenue. There was a picture of me sitting between my sisters, Sheila and Joan, in the Portsmouth News!”

Rene Parkyn is 95. She recalls that “I was working in the Dockyard as an electrician, but it must have been my day off as I listened to the announcement. There was a party on Pretoria Road and I danced in the street!”

Alan Layton was born in 1930 and lived in Copnor. He remembers that there was a “party on Bowler Avenue organised by the council. I think. We had sandwiches, jelly and blancmange. There was a bomb crater at the end of the road, filled with stagnant water, just beyond all the tables. I was glad that we didn’t have to go down into the Anderson shelter in the freezing cold anymore. I hated the War – but I’ll never forget VE Day and the party we had. We were going to be happy.”

Rene Jackson is 103. She says “I was living in Wellingborough. My husband was from there. He got posted to a station nearby and said if I go up there and stay with relations he could get weekend leave and see me. I went up there in 1941 and the next day he got embarkation leave and then spent four years in the Air Force in Khartoum! I was working at Saxby’s Pie Factory and on VE Day the whole Company walked out and went to church to give thanks.”

Beryl Moore says: “I was 14 when the war ended. We listened to the radio for Churchill’s speech then the next day or so George VI spoke. He thanked the nation and my mum burst into tears. My brother thought she was crying because she was sad. But we didn’t know what we felt: jubilation, but relief and also sadness because of those who had died. The man opposite us on Sudbury Road (Wymering) went down with the Hood (sunk in 1941).

“I remember going upstairs to bed. We used to say our prayers together and sing the first verse of ‘Eternal Father, Strong to Save’ in honour of our Uncle George who was in submarines. That night we sang two verses – we’d never done that before. And we sang the National Anthem. When we four went to bed that night, mum didn’t pull the curtains. It was the first time I could remember that. It made me realise the War had ended.

“It was decided that there was going to be a street party – like there was at the end of World War One. Mum must have organised it as it was right outside our house. All the kitchen tables came out and made one long table. Every family managed to bring at least one plate of food. My mum made a huge jelly in a wash basin and she wrote “VE” in cakes covered with blue icing all down the table! Children from Clacton Road and Wymering Lane came. There must have been 40 or 45 children.

“I can also remember the bell ringing at St Peter and St Paul, Wymering. Even though it was a single bell it still somehow managed to sound jubilant. We took it all in our stride. Although we knew what was happening, it didn’t come into our house as acutely as things do now when we see them on the television. But it meant a lot and I thought life would change completely. But there was still rationing.”

Hazel Tallack recalls that: “I was about 12 when the war ended. I’d lost my childhood to the bombs. We lived right by Fratton Station and it was very difficult. It was a bit of a blur. I just couldn’t believe it. It was just marvellous. Everyone was in the street and kissing everyone else!”

Ted Over was born in 1935. He remembers that: “on Vernon Road there was an area with some garages and empty space and on VE Day we lit a bonfire there with an image of Hitler on top. Some of the parents managed to get us some food. Tables were laid out. When we were bombed out of Dunbar Road, we went across the road to the people opposite and had a cup of tea at two o’clock in the morning.

“Then at first light my mum, dad, me and my little brother walked out of Dunbar Road and down to Alverstone Road – to number 84. If you found an empty house you could requisition it. That’s why we ended up there in 1944.

“I’d always wanted to be able to be a pilot in the Air Force so I could shoot down some of the horrible people who were attacking us. At 18 I got called up to do my National Service and spent a year in Germany. I saw there that it was not the case that these were wicked people. It was Hitler who was the problem.”