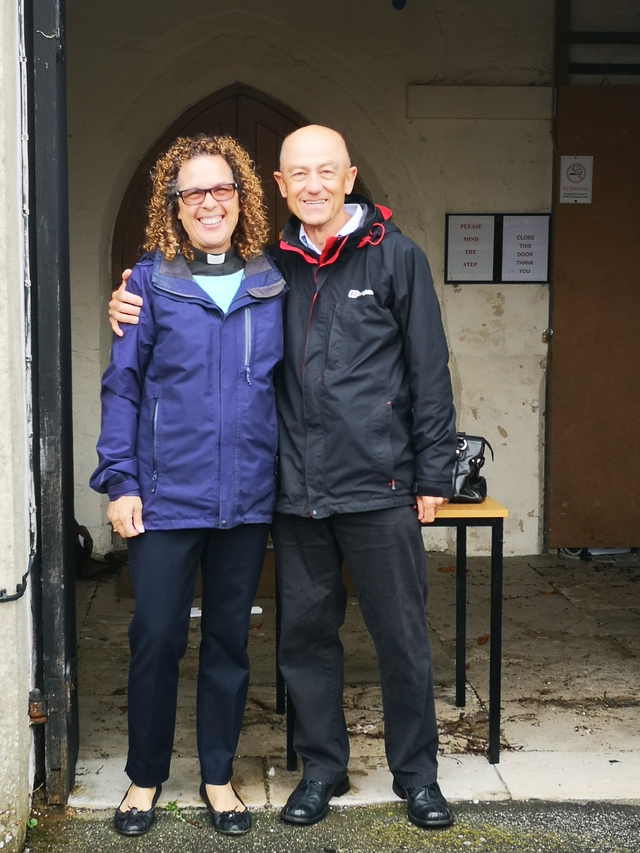 A MUCH-TRAVELLED island vicar has been licensed as the new priest in charge of churches in Newchurch and Arreton.

Following the retirement of the Rev Janice O’Shaughnessy in January, the Rev Kath Abbott was licensed as priest-in-charge of Newchurch and Arreton in a socially-distanced ceremony that involved just six people meeting in the churchyard of All Saints Church, Newchurch on June 12.

The Archdeacon of the Isle of Wight, the Ven Peter Leonard, conducted a service that involved the legal formalities with Kath, her husband Malc, and one churchwarden from All Saints, Newchurch, one from St George’s, Arreton, and one from St John’s, Wroxall.

Kath had already been licensed as the priest-in-charge at St John’s, Wroxall, in January, and had been waiting to take up the reins at Arreton and Newchurch too. The relaxation of some lockdown restrictions gave her the chance to be formally licensed in this unusual way.

“The churchwarden opened the belltower, as there was a slight drizzle, just so we could sign the formal documents without them getting wet,” said Kath. “But we thought it was important for the parishes that they got the stability of having their parish priest in post. They and I have been in limbo a bit since lockdown started.

“I’ll be working half-time across Newchurch, Arreton and Wroxall, and am looking forward to when we can all see each other as whole congregations, rather than on screens, or in small groups. Even so, the church is still very much alive here, with prayer in people’s homes, support via phone calls and good old fashioned letter writing.”

Kath has ministered at several parishes across the island in recent years. She was rector of Wootton and area dean until 2014, and then stepped down, in part, to be more able to care for her mother, whose health was failing.

After a year off from ministry, she started to lead services again at churches in Niton, Brading, Yaverland, St Helens and Seaview. She also joined the congregation at All Saints, Ryde. And it was leading midweek services at St John’s Church, Wroxall, that inspired her to apply for the vacant post there.

When church services are allowed to take place once more, there will be a service of welcome for the parishes and wider community.