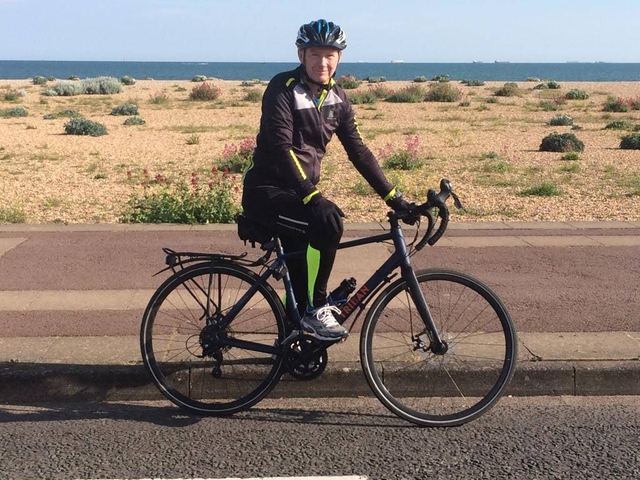 OUR diocese’s healing adviser is cycling 100 laps of Southsea’s seafront to raise money to build new classrooms in Uganda.

Retired GP David Pearson, from St Jude’s Church, Southsea, is cycling the equivalent of 550 miles – the distance from Portsmouth to Fort William in Scotland – to raise awareness of the work of the charity Compassion UK.

The charity is a Christian organisation that is responding to the needs of children in poverty around the world, and aims to give children the essential food, education, health provision and skills training that will help them to move out of poverty. Each project works via local Christian churches in their communities.

Since early 2014, David has been sponsoring a young man in a project named Asobora, near Hoima in Western Uganda. This is a very poor community where the project has already begun to make a significant difference to the lives of these children. Despite sponsorship, they’ve been hampered by lack of resources to develop the project facilities.

He also used to take part in a Medical Mission Week based at Kampala Baptist Church held every beginning of September, and visited the project the last time he was there in September 2015.

He said: “It was great to meet the lad I sponsor, but also meet the pastor for the church and see for myself the facilities as well as part of the village. At that time they were in the process of building a project office, which is now finished, and with solar panels allows the children some access to IT and internet. The classrooms however were only temporary shelters, and when I received an update from the pastor in 2018, it was clear that there was little prospect of more permanent classrooms being built.

“Since that time I have been prayerfully considering how I could help to make a difference in the situation and, being in lockdown, I felt prompted to see if we could raise funds through sponsorship, and Compassion were keen to encourage me in this.

“My aim therefore is to see at least two permanent classrooms built. At the moment however because of the restrictions of Covid-19 there is going to be delay before building work can start and it will also depend on the season, avoiding the rains. Being involved in raising funds through Compassion gives confidence that the money will be correctly handled and directed to the work that is needed.

“Because education is such an important part of what Compassion seeks to give these children it seems especially important that they should have the classroom facilities they need. We take so much for granted here that is lacking in other parts of the world.”

If anyone wishes to donate to this sponsorship, further details can be found on David’s JustGiving Page, which is here: justgiving.com/fundraising/david-pearson53.