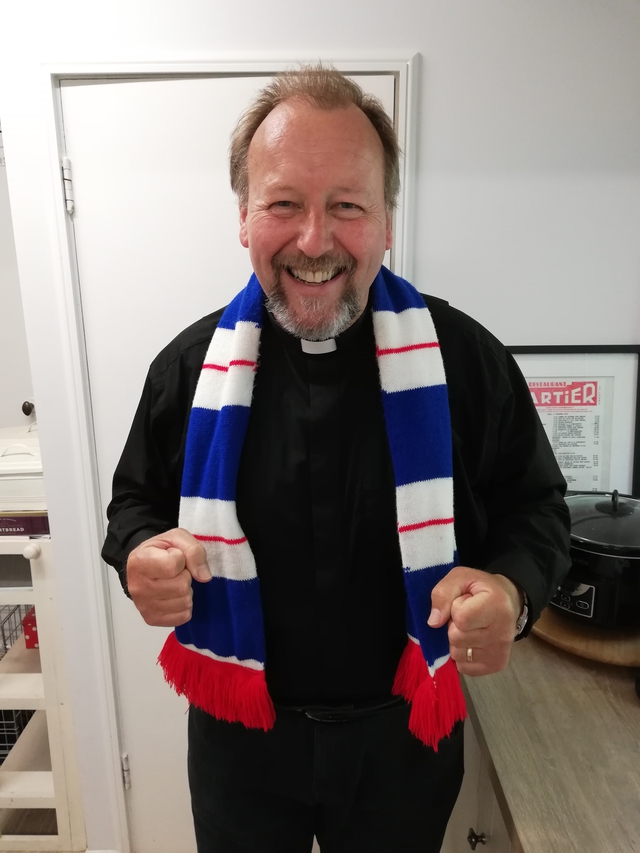 THE chaplain to Pompey FC will be there to support the team for their vital play-off match - but only as a cardboard cut-out.

The Rev Jonathan Jeffery, who is also vicar of Leigh Park and Warren Park, is determined to show his support for Portsmouth Football Club when they face Oxford in the League 1 play-off, even though it is being played behind closed doors. He will be joining the crowd of Pompey fans who will be represented by cardboard cut-outs inside Fratton Park.

When it was agreed that football could re-start, the League 1 clubs, including Pompey, voted to end their season, but with a formula to determine those clubs promoted, and those into the play offs. On that basis Portsmouth finished in fourth place and so play-off against Oxford United. The first leg at Fratton Park is on Friday 3rd July, with the return fixture on July 6th. If Pompey are successful, they'll progress to the play-off final on July 13th at Wembley.

The scheme, supported by the football club, enables fans to pay to have their photos turned into a waterproof, recyclable cut-out, with the hope of filling the ground and showing the team the depth and strength of their support. There is even a chance to claim your cut-out to keep at the end of the scheme. Profits will help the Portsmouth Academy of young players.

Jonathan said: “If the season had played out, I was hopeful of following Pompey all the way to promotion. An automatic place is not now possible but the play-offs would be an exciting alternative. It is a great scheme to show support for the team and the benefit the youngsters of the academy too.”

The cut out that will be used (pictured above) shows him as chaplain in his clerical shirt and Pompey scarf, and he hopes that many other fans will feel able to be 'present' at such a memorable occasion.

He said: “I hope that the sight of so many fans will encourage Pompey against Oxford, and no doubt with all those cardboard cut outs, one of the sides will be using a Flat Back Four! Play up Pompey!”