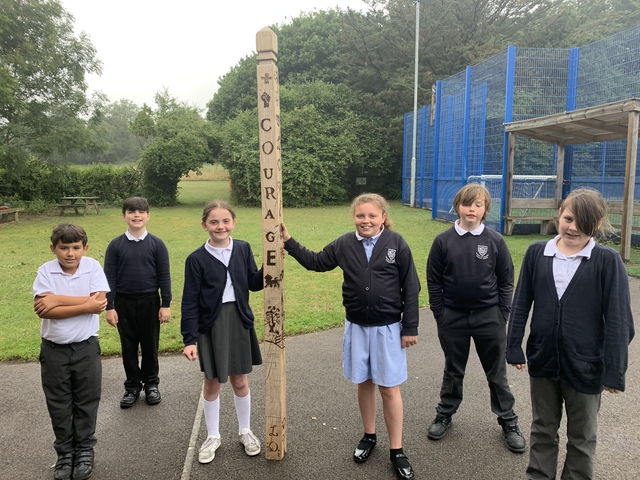 STAFF and pupils have contributed to a video that marks the culmination of a year-long project with 11-year-olds who are just about to leave primary school.

Year 6 pupils in C of E schools across Hampshire and the Isle of Wight were asked to create Peace Poles as part of a 'Standing Together' project run by our diocesan education team in 2019-20. It's the latest in a series of year-long projects undertaken with Year 6 pupils in recent years.

Normally, hundreds of these 11-year-olds are invited to Portsmouth and Winchester Cathedrals for a day of workshops and worship around that year's theme. The annual Leavers' Service has become a rite of passage for these pupils as they move on to secondary school. This July, that hasn't been possible because of the coronavirus lockdown, so a video has been created instead (click on the video above to watch the 15-minute presentation)

The 'Standing Together' project aimed to draw together thinking about Holocaust Memorial Day and greater tolerance of others in the light of increased xenophobia. The idea of schools creating a Peace Pole was a way in which they could symbolise the values of peace and unity that Christians in general and their school in particular stand for. This wooden Peace Pole could be carved or painted with appropriate images and then be placed outside their school as a physical expression of their values.

Schoolchildren spent time creating their own Peace Poles, and then explained their thinking as part of the Year 6 Leavers' video. Among those who are featured in the video are children from Swanmore C of E Primary School, Wickham C of E Primary School and Horndean C of E Junior School.

Year 6 pupils at Oakfield C of E Primary School on the Isle of Wight are currently in two ‘bubbles’ of 15 pupils. The project connected the two together, working collaboratively on a piece of artwork that would be installed permanently on the school grounds.

The school decided to use a new medium that children had not used before - papier-mâché clay. Children thought about the idea of standing together, and felt these words needed to be in a prominent position on their pole. They looked at pictures of sunflowers standing together in a field and felt that creating faces would be a way of showing everyone standing together.

The children explored peace poles and how the faces could be constructed with their exaggerated features and colours. For their own faces, pupils first drew a design and spent some time thinking about colours and what would stand out. To support size and shape, each child was given a laminated face template upon which to 'build' their face. The faces were then baked in the oven to dry them out ready for painting.

Teacher Sam Scovell said: "The children were pleased with the effects and pleased that the pole would be positioned in our reception area for September. A little bit of them remaining at their primary school standing together."