PHOTOS: Prayers at the foundations of new school 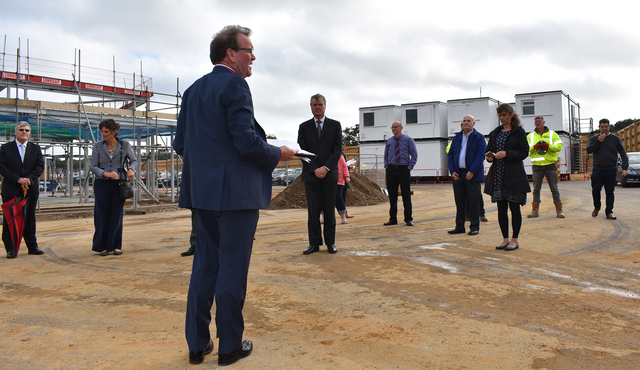 BISHOP Christopher led a short, socially-distanced service of prayer at the foundations of the new Cornerstone C of E Primary School site in Whiteley.

The bishop was joined by Rev Philippa Mills, vicar of Whiteley Church, as well as local councillors, school governors and teachers, representatives of Midas Group, the construction company, and local MP Flick Drummond.

Tim Clarke, Headteacher of Cornerstone C of E Primary School, read from Isaiah 28 about God laying a ‘precious cornerstone, a sure foundation’. He said after the service how he was “very excited, really pleased to be here on site. This project is something we’ve been working on now for about 6 years, and I’m glad the finished school will become part of the overall jigsaw of provision for children here in Whiteley.”

During the service Rev Philippa Mills, vicar of Whiteley Church, invited people to tie crocheted butterflies to display area as a visual expression of their hopes and dreams for the project and the school. She shared afterwards, “It’s a very exciting day for us, as Whiteley Church has not had a permanent home in Whiteley before. We’re looking forward to worshipping here on a Sunday but also going out from here into the community. We know that Christ is our cornerstone, and so being here, being able to pray at the ‘cornerstone’ of Cornerstone School feels very significant.”

Chris Webb, Operations Manager with Midas Group, the construction company running the project, said, “The project has been a real challenge, especially with COVID-19 complicating things at the start of the build. But we’ve overcome those problems and are progressing well with the construction. We’ve also been able to reduce the expected carbon footprint of a build like this by repurposing the raw material that has been excavated for the building to other areas of the site, instead of taking it away for disposal somewhere else.”

Despite the dark clouds looming overhead, the rain held off and those attending the service were also able to take a quick guided tour of some of the areas of the construction.

You can read more about the construction project here.