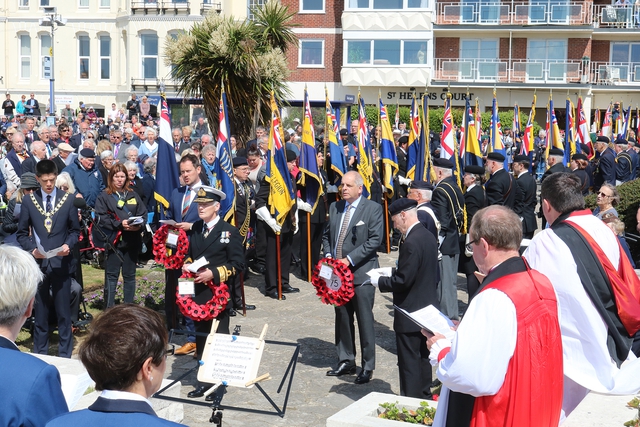 PORTSMOUTH residents are being invited to mark Remembrance Sunday by joining a live-streamed service from Portsmouth Cathedral.

This service, which starts at 10.55am on Sunday 8 November, will remember and give thanks for the many men and women around the world who have given their lives in the service for their country. It will be broadcast from the cathedral, where there will be no congregation, in line with the current lockdown restrictions.

It's one of many live-streamed or pre-recorded services to mark Remembrance Sunday that are happening across south-east Hampshire and the Isle of Wight.

Portsmouth Cathedral will be livestreaming the service on its Facebook page for people to join and pay their respects. Two minutes silence will be kept at 11am, following which the Dean of Portsmouth, the Very Rev Dr Anthony Cane, will lead an act of remembrance. Bishop Christopher will reflect on the importance of remembrance in his sermon.

Throughout the service, music will be provided by Portsmouth Cathedral Choir, with prayers being offered to those who have suffered as a result of conflict, those who grieve, our armed forces and for all those who seek to work for peace.

Bishop Christopher and members of the cathedral will also be part of Portsmouth City Council's Remembrance service, which will be broadcast on the council's Facebook page from 9am on Sunday 8 November.

The virtual service will feature pre-recorded addresses and readings from Bishop Christopher and the Roman Catholic Bishop of Portsmouth, the Rt Rev Philip Egan, the Lord Mayor - as well as representatives of Portsmouth's Catholic, Jewish, Muslim and Sikh communities. Music will be provided by the Portsmouth Cathedral Choir and musicians from the Band of Her Majesty’s Royal Marines.

Residents can also join together in solidarity with the armed forces community by displaying a poppy in their window. This could be a traditional Royal British Legion paper poppy, a homemade poppy, a coloured-in poppy or a printed picture. There are pictures of poppies available to download and print from the Royal British Legion website.

Cllr Gerald Vernon-Jackson, the leader of Portsmouth City Council, said: "Portsmouth is a military city. Even though there are restrictions this year we thought it was essential that there was a service to commemorate the sacrifice of so many, but it is right that with limited space veterans take priority over the great and the good.

"We'll also find new ways to join together as a city, as we do all we can to protect each other, and especially the most vulnerable in our community, from the spread of coronavirus. I'd encourage as many people as possible to join the service of remembrance online, share a memory of someone who served, or display a poppy in your home."

And the Very Rev Dr Anthony Cane, Dean of Portsmouth, said: “Remembrance Sunday is always a moving and important event for Portsmouth and our nation, all the more so this year, 75 years after VE Day and VJ Day. Given that the usual Guildhall Square event cannot take place because of Covid-19, it is a privilege for Portsmouth Cathedral to host a service to pay tribute to those who have given their lives in the service of their country.”

Newport Minster will also live-stream a service for Remembrance Sunday from 11am that morning. Worshippers are encouraged to mark the two minutes' silence on their own doorsteps, after which the minster will broadcast a service of Holy Communion on its Facebook page. This is in place of the normal large gathering at Newport War Memorial.

Villagers created a display of almost 1,600 knitted poppies outside All Saints Church, Denmead, ahead of Remembrance Sunday. The Big Knit Project united church and community - you can more about it here. They'll mark Remembrance with a pre-recorded service which you can watch on www.denmead-remembers.co.uk.

A civic service of Remembrance will be broadcast by St Faith's Church, Havant, at 10.50am on November 8. It will include the laying of wreaths and contributions from Havant MP Alan Mak, the Mayor of Havant Cllr Prad Bains, the former head of the Armed Services Lord Richards, the Deputy Lord Lieutenant of Hampshire Major Gen Jamie Balfour, and St Faith's choristers. At 11.02am, a single bell will be tolled 161 times to mark the 161 names inscribed on the Havant War Memorial. You can watch on the website or Facebook page.

On Armistice Day - November 11 - the city council will also share a short service of reflection led by Canon Bob White, which has been recorded at the Garden of Remembrance. Full details are here.