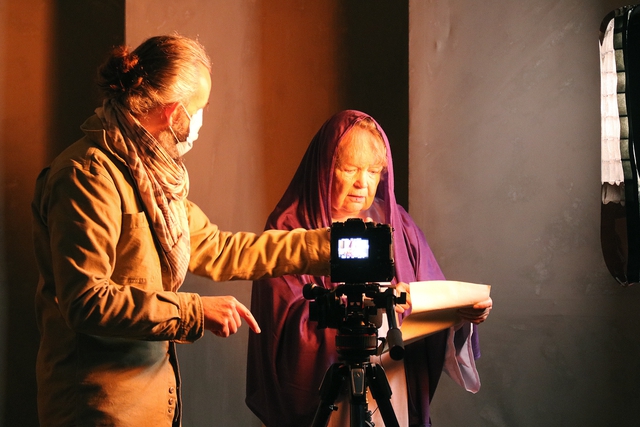 AMATEUR writers and actors from across the Havant area have come together to create a Living Advent Calendar.

It tells the Nativity story through video, as a way to prepare for Christmas in Covid times.

The story of Jesus’s birth will be told through 26 separate dramatic monologues, each portraying a different character in the Nativity story. Every morning during Advent, a new video will be unveiled on Youtube. Those following the story can simply click on a new clip daily – the virtual equivalent of an Advent calendar, but with real people behind each window.

Some of the two or three-minute videos were recorded ahead of November’s lockdown at St Francis Church, Leigh Park. The remaining videos will be recorded once lockdown restrictions are lifted in December.

Among the characters featured are Mary, Joseph, the angel Gabriel, shepherds and Magi. But the writers have also written scripts for characters who are rarely portrayed, such as Mary’s mother, a Roman official announcing the census, and Herod’s servant.

The first video (which you can see below) is available on Advent Sunday – November 29 – and they will then be unveiled each day until Christmas Eve.

The project has been co-ordinated by the ecumenical Havant Passion Play group, which presented outdoor performances telling the story of Jesus in the summers of 2015, 2017 and 2019. Those performing in this new production come from churches of all denominations across Havant, Waterlooville, Emsworth, Bedhampton, Petersfield, Rowlands Castle and Leigh Park.

Ingrid Corrigan (pictured above recording her monologue), who attends Bedhampton Methodist Church and is part of Havant-based Bench Theatre, has recorded one of the early videos, acting as Miriam, who receives a letter about the birth of John the Baptist to Elizabeth and Zechariah.

“I’d never been involved in the Passion Play productions, but I heard about this Advent Calendar plan and thought it was a great idea,” she said. “I really wanted to do something to help, and I appreciate that doing it online is the only way we can do it at the moment. Although my character is some way away from the Nativity story, it still helps to build up a picture.”

And the Rev Jonathan Jeffery, vicar of St Francis, will be lending his comic talents to the role of the innkeeper, who unwittingly hosts Jesus’s birth in his stable.

“I think it’s really important to keep finding new ways of telling the Nativity story,” he said. “Focussing on a different character every day during December will help us to imagine what it might have felt like 2,000 years ago and engage with the hope and expectation of the moment, which we believe changed everything. It’s a message we need to hear this year more than ever, and at HPP we are delighted to have found a way to offer the story as widely as possible to the biggest possible audience.”

The scripts were edited and the videos filmed by James Burke-Dunsmore, who plays Jesus in the annual performances of The Life of Christ at Wintershall near Guildford, and the Passion Play staged in Trafalgar Square each Good Friday. He also directed the three outdoor plays staged by the Havant Passion Play group in 2015, 2017 and 2019.

HPP chair the Rev Bill Stillwell said: “James is a joy to work with. He knows how to get the best out of our writer and performers and how to win an audience, but he also understands the story and the message of it. The combination of our enthusiasm and his expertise will create something vibrant and dynamic for people this Advent. We’re really excited for the project and can’t wait to start uploading and opening our Living Advent Calendar windows!”

A week-long shoot was originally scheduled for mid-November, but filming for eight of the monologues and the three trailers was brought forward at two days’ notice, once the month-long lockdown was announced. The actors and those supporting them ensure the St Francis church hall was Covid secure before and during the rehearsals. The remaining monologues will be filmed as soon as lockdown is lifted.

The plan is that the video recordings will ultimately be collected together onto a DVD which will be made available for churches and schools to use to tell the Nativity story in the future.