Gavin Collins to be the Bishop of Dorchester 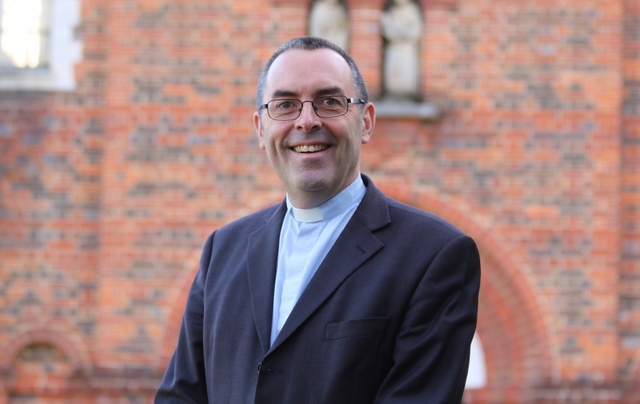 HER Majesty the Queen has approved the appointment of the Ven Gavin Collins, Archdeacon of the Meon, as the next Bishop of Dorchester.

Gavin, who has been an archdeacon in our diocese since 2011, will be consecrated as a bishop in January 2021 before taking on his new role in the Diocese of Oxford in early March.

Due to lockdown restrictions, the Bishop of Oxford, the Rt Rev Steven Croft, announced the news at an online meeting streamed from Dorchester Abbey, with over 100 civic leaders and local clergy in attendance. The online announcement was followed by a visit to St Mary’s Church in Chipping Camden, Oxfordshire, where volunteers are supporting over 200 families during lockdown through an initiative called Mary’s Meals.

Father-of-three Gavin, who is 53, said; “I am thrilled and humbled to have been invited to serve as the next Bishop of Dorchester and look forward to joining the Diocese of Oxford in the New Year. It will be a privilege to work and worship alongside the people of these churches as, together, we serve the communities of Oxfordshire.”

Gavin is one of the convenors of the Evangelical Forum on Synod and has served as a trustee of Latin Link mission agency and of the London School of Theology. He is deeply committed to the mission and growth of the Church. He said: “My priorities in ministry have always been to enable the church to grow in unity, in confidence, in numbers and in the depth of our experience of the love of God.

“Throughout lockdown, churches across Oxfordshire have shown us that nothing can separate us from the love of God, and our calling to show and share that love with the communities around us. Jesus’ promise is that he came to give us life in full abundance, and, as Bishop of Dorchester, it will be a joy to play a part in helping the Church to grow into and live out that abundance of life.”

He was educated in Law at Trinity Hall, Cambridge. He then worked as a solicitor in the City of London before training for ministry at Trinity College Bristol. Having grown up in Sussex, Gavin is a life-long and active supporter of Brighton and Hove Albion, which he says, proves he is a person of great faith.

He was ordained in 1997 and served his curacy in Cambridge, then was vicar of Christ Church, Chorleywood from 2002 and was also rural dean of Rickmansworth from 2006, before becoming Archdeacon of the Meon nine years ago. He was elected to the Church of England’s General Synod in 2013 and became our Warden of Readers in 2014.

Gavin is married to Christina, who is a health visitor, and they have three young adult children. He is a keen cyclist and runner, and recently cycled from Lands End to John O’Groats with one of his sons.

The Bishop of Portsmouth, the Rt Rev Christopher Foster, said: “Along with the whole of the Diocese of Portsmouth, and especially the Meon archdeaconry, I am delighted that the counties and Diocese of Oxford will enjoy the leadership and service of Gavin Collins as the next Bishop of Dorchester. He and Christina will bring their many gifts, including friendship and generosity, to the mission of the gospel in parishes, chaplaincies and communities.

“Here we shall miss Gavin’s wisdom, commitment and energy in the many ways his ministry has contributed to our service and outreach, particularly in encouraging and enabling initiatives for the growth and renewal of our individual and corporate discipleship. He has filled many important roles, especially as my senior diocesan colleague for some years, but we honour him most not for what he did but for who he is as a fellow disciple of Jesus.”

And the Bishop of Oxford, the Rt Rev Dr Steven Croft said: “I am delighted that Gavin has accepted the invitation to be the next Bishop of Dorchester. Gavin is known for his warmth and approachability, and he is passionate about the mission of the church. He’s experienced in bringing churches, local authorities and civil society organisations together for the good of all, and is clear about the issues rural communities and towns face. I am very excited about what Gavin’s appointment means for the Diocese of Oxford.”

Gavin will succeed the Rt Rev Colin Fletcher who retired from the role in November. He will be consecrated on 28 January.

The Diocese of Oxford is one of the largest dioceses in the Church of England. It is divided into four ‘episcopal areas’, each overseen by their own area bishop.

The Dorchester Episcopal Area is larger than many dioceses in the Church of England. The area covers all of Oxfordshire, apart from the City of Oxford. It extends from the Cotswolds in the west to Bicester in the east, and all the way down to Henley-on-Thames. There are 326 churches and 117 church schools in the area, serving a population of over half a million people. And 70 per cent of parishes in the Dorchester Area are involved in social action.