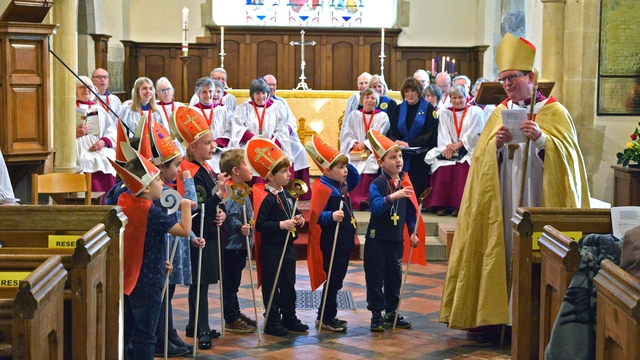 A SPECIALLY-WRITTEN piece of music is helping one of our churches to mark its 900th anniversary.

Singers from the Igloo Choir have put together the song - entitled 'Call the Changes' - to help worshippers to celebrate 900 years since the creation of St Nicholas Church in Wickham.

The church had planned a whole year of celebrations in 2020, but most of the events had to be cancelled because of the Covid pandemic. After a launch event (pictured above) with Bishop Christopher, and Valentine's weekend in February, the concerts, services and lectures that had been planned during the rest of the year were unable to take place.

However, the Igloo Choir wanted to mark the occasion with something special. They attended a rehearsal of the church's bell ringers in February. The singers heard about how bells are rung and some of them were able to have a go at ringing themselves. They learnt about 'calling the changes', as the term for bell ringers calling out which peals will come next - as well as many of the traditions associated with bell ringing.

To mark the anniversary and also the choir's 10th birthday, they started writing a song about the bells. But the first lockdown in March prompted them to hold rehearsals via Zoom. They then recorded it remotely, with each choir member sending in their own part, captured on a phone or digital device. Some even used a photo of St Nicholas as the background for their contribution.

The resultant video was uploaded to Youtube and can be seen above. For more information about the Igloo Choir, see www.igloomusic.co.uk/choir or their Facebook page here.

With the resumption of public worship permitted from December 2, St Nicholas still hopes to hold the service that it had originally planned to end the year of celebrations on December 6. The Ven Gavin Collins, Archdeacon of the Meon will preach - he was unveiled earlier this week as the new Bishop of Dorchester.

The summer lecture series that was due to take place this year has been rescheduled for next June, and some other events may well also take place in 2021.

St Nicholas Church, Wickham, was originally built at the junction of what is now the A32 and Southwick Road back in 1120.