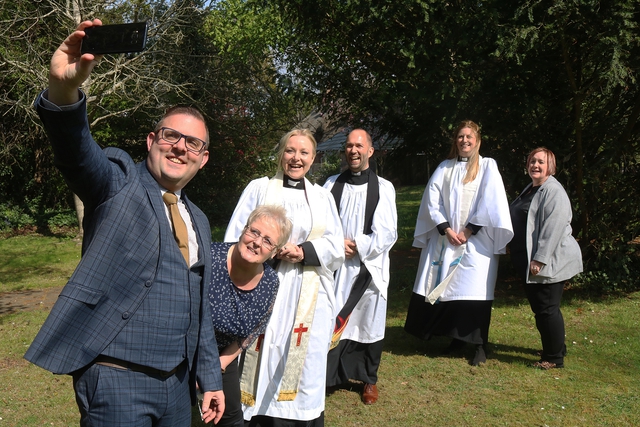 THE team who will lead mission and ministry in the new parish of North Gosport was completed with a double licensing.

The Rev Samantha Martell and the Rev Jude Greenfield were both licensed as team vicars for this new parish at a service held at St Mary the Virgin, Rowner. The acting Archdeacon of the Meon, Canon Will Hughes, led the service.

The pair will join the Rev Richard England, who is team rector for North Gosport, as well as lay leaders from this new team ministry, which was created by the merger of the previous parishes of Rowner, Bridgemary and Elson. The Rev Samantha Martell was previously priest-in-charge at All Saints, Ryde, while the Rev Jude Greenfield was previously a curate at Holy Rood and St Edmund’s, Stubbington.

And it was representatives from their previous parishes who began the service by presenting them to the acting Archdeacon and commending them for their new roles.

Both priests and the whole congregation then made promises to love, pray and support each other, as well as serving their local community and seeking new disciples of Jesus. The newly-licensed vicars were also given gifts such as a Bible, bread and wine, oil and flowers, each of which symbolised a different aspect of their new roles.

In his opening remarks, Canon Will Hughes said that between them Samantha and Jude represented a broad range of the Church of England’s traditions, which would ensure a variety of worship styles across the new team ministry.

And in his sermon, team vicar the Rev Richard England, said: “This is a new chapter for this new parish of North Gosport, but the calling of God is for all of us. We are all called to serve our communities, in those places where God has called us.”