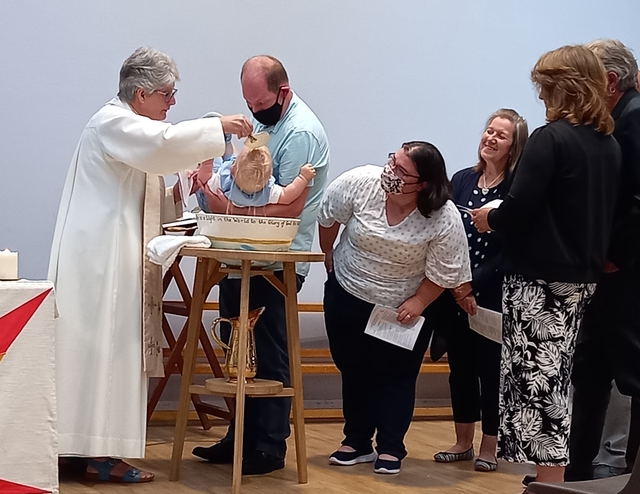 WORSHIPPERS at St John's Church, Ryde, have worked alongside schoolchildren to create a new font - which was used for the first time this week.

The congregation has been holding services in Oakfield C of E Primary School because their church building needs some repair. But the changed venue has given them the chance to create something new and unique.

Congregation members Roger and Marjorie Grist were married in St John's. They welcomed baby Daniel into their family during lockdown in April 2020, and wanted to celebrate his baptism. However, the school had no font.

The Rev Sue Theobald, vicar of St John's, Vikki Reader, headteacher of Oakfield School, and Sarah Rowe, a member of the congregation and the RE lead at the school, put their heads together and came up with a plan.

Following a discussion about baptism and the symbolism involved with Rev Sue, the children in Year 6 were asked to design the decoration for the bowl of a font. A large bowl was bought from Fired Art, a pottery painting studio in Ryde, and the children’s designs painted onto the bowl by the teachers. The bowl was then returned to the pottery studio for firing and glazing.

David Rowe, a churchwarden at St John’s, designed and made a wooden stand for the bowl with his father John. So a new portable font was created.

The funds for the new font came from a donation to the church in memory of Matthew Fox, a much loved member of St John’s congregation who sadly died in November 2020. The Rev Len Fox, Matthew’s father and a former vicar of St John’s, was invited to dedicate the font on Sunday 8th August. And baby Daniel's baptism on August 15 was the first time that the font was used.

Rev Sue said: “This has been such an exciting project. It demonstrates the close link between St John’s and Oakfield School and has been a great way to involve the children at Oakfield in a very special and real way in the worshipping life of the church. It has also been a wonderful way of marking the beginning of a new thing which we believe God is doing here at St John’s.”