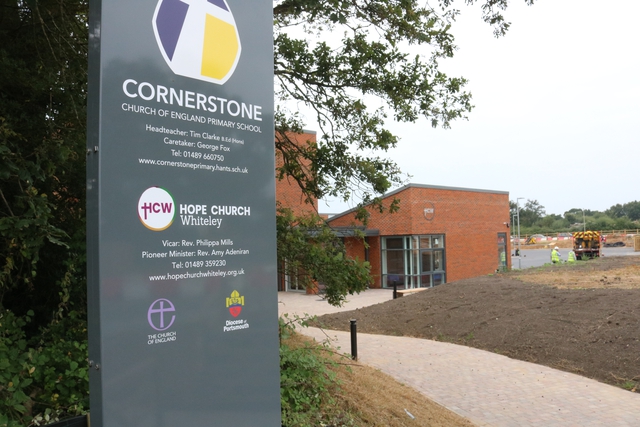 OUR commissary bishop today officially opens the brand new building that will host both a Whiteley primary school and the town’s church congregation.

Bishop Rob Wickham will officially open Cornerstone C of E Primary School’s new £12m building, in Bluebell Way, Whiteley, on September 7. Dignitaries and guests will join pupils on the first day of term in their new building for an act of collective worship.

The school has relocated from its previous home in Bader Way, Whiteley, and been enlarged to cater for thousands of families who will move into new homes in North Whiteley over the next few years. The year-long building project has provided a school that can cater for up to 630 pupils aged between four and 11 years old.

The building will also become the new home for Whiteley Church and provide a reflective space for the wider community. The church has met for Sunday services, first in people’s homes and then in Whiteley community centre, since its creation in 1995, but has never had a space of its own.

A new chapel will provide a spiritual focus for both school and church communities during the week, while Sunday worship will happen in the building’s main hall. The switch of venue for Whiteley Church has also prompted a change of name – the congregation will now be called Hope Church, Whiteley.

The school is being enlarged to provide places for families moving into the 3,500 new homes planned to be built in North Whiteley over the next few years. The single-storey building includes 21 classrooms, four group rooms, large and small school halls, a studio, food technology rooms and the chapel. The outdoor facilities will include three sports courts and three sports pitches.

Contractors Midas Construction began work in May 2020, once Covid restrictions were relaxed to allow building work. The Rt Rev Christopher Foster, then Bishop of Portsmouth, led socially-distanced prayers over the foundations of the new school in August 2020, and building work was completed on time for the start of this autumn term.

Bishop Christopher has since retired, so it will be the Bishop of Edmonton, the Rt Rev Rob Wickham, who will lead the first act of collective worship in the new school on September 7. He is acting as commissary bishop for the Diocese of Portsmouth, in addition to his role as one of the bishops in the Diocese of London.

Bishop Rob will be joined by guests including local Mayors, councillors and officers from Fareham, Winchester and Hampshire councils, plus community leaders, school governors and church representatives.

One of the guests attending is Mary Leahy, who grew up on the farm where Cornerstone C of E Primary School now stands. She remembers harvesting potatoes and other crops in the fields on which the school has been built.

The headteacher, Tim Clarke, said: “Our school and community has grown from having 27 pupils on our original temporary location in 2013; building on our school Values of Love, Forgiveness and Hope.

“We have worked in a close and constructive partnership with colleagues from Hampshire to develop a purpose-built, modern and flexible environment, focused fully on enhancing teaching and learning and empowering our children to grow as people and learners. We’re delighted to use these excellent, modern facilities to continue this development, and we are all excited to continue to grow our Inspirational Learning Community with all the children, families, staff and governors over the coming years.”

The vicar of Hope Church, Whiteley, the Rev Philippa Mills, who is also a school governor, said: “This is a really exciting moment for the whole Whiteley community. This building will become the heart of the new community of North Whiteley, and I’m delighted that both church and school will meet in the same place, as families will be very used to meeting here.

“Whiteley has had a long wait for a dedicated church space. This joint venture will give both the school and the wider community a prayerful, reflective place, as well as providing a home for Hope Church, Whiteley.

“We’ve taken this moment to change our name to something that I pray will reflect this growing community – that our church can be a beacon of hope, providing a genuine welcome for those moving into this new development, drawing the existing and new communities together, and providing excellent spiritual support.”

And Steven Lee, Director for Midas Construction, part of the Midas Group, said: “We are incredibly proud of what has been created here and the way in which the entire project team has worked so well together to safely deliver this fantastic resource for the local community

“It is wonderful to see the building being brought to life by pupils starting a new year in their brand new school and we look forward to it welcoming generations of children from this growing local area over the coming years.”

The original Cornerstone C of E Primary School was opened in autumn 2013 in Bader Way, catering for four to 11-year-olds in addition to the existing Whiteley Primary School. Bishop Christopher officially opened that building in October 2013.

And Whiteley Church originally started meeting in 1995. The church met in a number of different locations before settling in Whiteley Community Centre in Gull Coppice in 2002. Congregation members met there for Sunday services, baptisms, Messy Church, and other midweek meetings, but had to put out chairs and other equipment each time they met, as the centre is used by others.