The powerlifting priest who tackled a new sport during lockdown 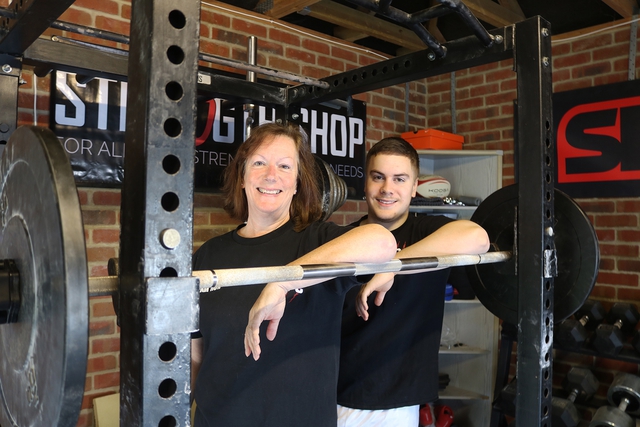 SHE is the powerlifting priest who is pumping weights to help raise money for charity.

The Rev Deborah Curram, associate minister for Hayling Island, started lifting weights during the pandemic lockdown. She trains alongside her 17-year-old son Huw, who is competing for Team GB in the World Powerlifting Championships in Pabianice, Poland at the end of October.

Huw helps to train Deborah in the gym they’ve created in their garage. Now she’s hoping others will sponsor her as she tries to lift the total required to qualify for the world championships in her weight and age category.

The family arrived in Hayling Island from Gloucestershire in 2019. Huw was already competing as a powerlifter and came first in his age and weight class in the World Championships in Slovakia that year.

But when the first lockdown started, it was tricky to keep up his regime. So the family converted their double garage into a gym and bought equipment on Ebay – to allow him to continue to train for anything up to four hours a day.

Deborah is now aiming to powerlift a total of 222.5kg across the three disciplines of squat, benchpress and deadlift – the qualifying standard for the world championships. And she hopes to raise funds for the three Church of England churches in Hayling Island and for charities supported by NHS Charities Together.

“I used to take Huw to the gym and competitions from the age of 14 onwards,” Deborah said. “I’d often be sitting there in my dog collar, writing sermons on my computer while he was training. I could see that the world of powerlifting is a real community – I was amazed at how much powerlifters care for each other. I also got to hear some fascinating stories, including people for whom powerlifting was a route out of addiction.

“When we moved to Hayling and then lockdown happened, we started to look for equipment online, so that Huw could continue his training at home. I started doing some powerlifting myself in February this year, to keep Huw company, and discovered I enjoyed it. If I was feeling a bit weary, this helped me to focus on something else.

“My husband works away from home a lot, so this was a good way of doing something practical with Huw. I also discovered it helped me with my core strength, and my back and hip issues have gone. Huw’s a good coach, and we’re now getting close to my target weights.”

And Huw, who is also a student at South Downs College, said: “It’s fantastic for me to have mum involved. If I train by myself, I can get sidetracked, but we can feed off each other’s energy. Mum is also a good pupil. She does listen to what I tell her!

“I’m currently studying to be a personal trainer, learning about nutrition and sports massage, and would love to study sports therapy at university. So this is really good practice as well.”

Deborah, her husband Nic and Huw also plan to compete as a family in an event in Birmingham in December. To sponsor Deborah as part of her challenge, contact her here.