MY FAITH: Ex-addict gets baptised in the sea 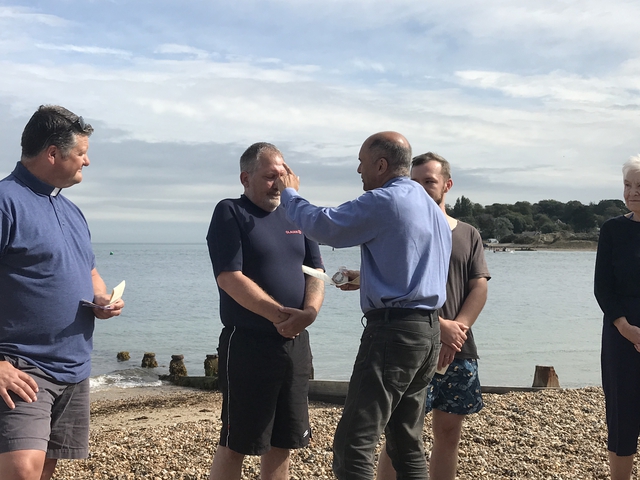 WHEN Ady Hodgkinson was baptised in the sea earlier this year, it marked an incredible transformation in his life.

The 54-year-old islander had been an alcoholic and a heroin addict for many years before discovering the difference that God could make in his life. And it was his involvement with Aspire Ryde that led to his conversion – and a dramatic moment when he was filled with the Holy Spirit.

So it seemed appropriate that the Rev Heath Monaghan, who used to lead Aspire Ryde, should baptise Ady in the sea as a public witness to his changed life – alongside three other adults who also wanted to declare their Christian faith.

“My life had been quite a mess,” said Ady. “I’d been drinking since I was 21 and used drugs. I had always pooh-poohed religion, but I knew something wasn’t right with my life. I’d been through rehab programmes, but it wasn’t until 17th May 2015 that I gave up the drink. I’d gone out with my girlfriend and I decided to video it to see how foolish we were. Once we watched it back, we realised we had to give up drinking.

“That September, I could feel myself slipping and wanted to do something else instead of just sitting indoors. A friend suggested volunteering at Aspire Ryde, which is in an old church building. Well, during my tour of the building, I felt like people were constantly talking about God.

“I politely went through with the induction, but thought I won’t come back. I emailed Heath to say I was sorry, but his church wasn’t for me. He emailed back to say it wasn’t a church, but a community centre – very clever! – and could I come back for a coffee and a chat?

“I went back and he asked me to work in the café. I enjoyed the work, but I didn’t like the Christians asking if they could pray for this and that. I thought I’d move on as soon as I found something else, but after a year something strange happened.

“It was about 10am on a Monday and an old friend came into the building who I hadn’t seen for 30 plus years. It was Chris Cass, who I knew when we were teenagers. He had been praying the night before to meet friends from the past, so when he met me, he said it was an answer to prayer. I decided to ask him about Christianity and the story of Jesus. He had plausible answers to everything I asked, and I saw him every day for a week or so.

“Then one evening, he sent me a Facebook friend request, and then he sent me a link to a sermon he was doing online. Out of curiosity, I clicked on the link and he was talking about how Jesus can save us, if we ask him into our lives. I asked him about it the next day, and the next evening, he did another online sermon.

“He was saying if we wanted to ask Jesus into our lives, then we should follow him in this prayer. So I spoke out loud the prayer asking Jesus to come into my life, thinking I had nothing to lose. I thought I should be feeling different, but there was nothing!

“That night, there was a third online sermon that Chris was broadcasting. I don’t even know why I did it, but I thought I’d watch again. Well, the only thing I remember is that a force that I now know was the Holy Spirit visited me that night and held me down on my sofa and I couldn’t move.

“I started to sob and sob. Tears were falling like a tap had been turned on. I had no concept of time at all, but it did feel like it was 20 minutes or thereabouts. Then I was able to move. This is when I opened my eyes and everything in my living room was a different shade of orange for a few seconds. I was amazed that I’d been touched by the Holy Spirit and that God had answered my prayer. I had an inner peace from then onwards, and had a feeling that all my worries had been lifted.”

Ady’s family were initially sceptical. They thought he’d joined some kind of cult because he’d been so anti-religion beforehand. But they quickly realised this was something he was serious about. He started offering to pray for them, got himself a Bible and started reading about Jesus. He went to church in Ryde, and went to a Christian festival called New Wine with other island Christians.

“I applied to work in one of the café areas within the main arena at New Wine,” he said. “Well, what an experience being part of a 6,000-strong Christian family singing worship songs. I was blown away at the awesomeness of it all.

“While I was on a shift one day, my team leader came running up to me and asked if I could come and pray for someone who had collapsed with pain in his knees and was unable to walk. My first response was ‘Why me?’ My team leader said she’d asked God what to do and he said to come and get me. I had no choice but to go over and pray with two others for him.

“I was scared, as I’d never prayed for healing for anyone before and wasn’t sure if I was praying right anyway. I knelt down and asked if I could put my hand on the person’s knee. He said yes. So I started to just pray in my mind that God would help me to help him.

“After a short while, I started to produce these strange words. I stopped straightaway as I was really scared as to what was happening. But I heard a soft voice saying ‘Don’t worry. Just go with it’. So I did. I continued to pray then the strange words came again. I was praying in tongues!

“When we had all finished praying, the person that couldn’t walk before got up and walked around the arena all night with no pain whatsoever. This was amazing as I’d been part of this in my early walk with Christ. Now I pray all the time for healing for people. Some are healed and others aren’t. But that’s OK because I know God’s got this!”

In 2019, Ady was offered a paid post at Aspire Ryde, managing the café and soft play area there. God also answered his prayers about his damp accommodation, which wasn’t helping his emphysema. He moved to a new home near All Saints Church.

And this September, Ady was able to witness publicly to the change in his life, as he was baptised in the sea by the Rev Heath Monaghan and the Rev Steve Daughtery, vicar of Holy Trinity, Bembridge. Ady was baptised along with three others who had come to faith via Aspire Ryde – the community hub based in the former Holy Trinity Church. Ady waded into the sea and was fully immersed, as a symbol of his past life being buried and a new life emerging.

“When I turned around and looked, lots of people had stopped and were watching,” he said. “It was an awesome feeling. I don’t even remember if the water was cold or not, just that it was a declaration that Christ was part of my life.”