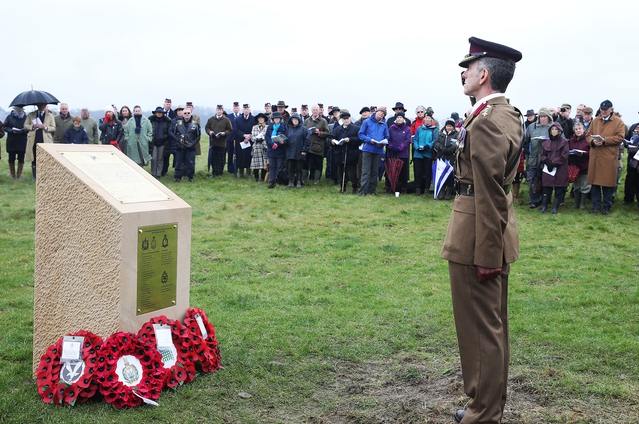 WE remembered 33 servicemen who sacrificed their lives in a tragic wartime accident - with a poignant dedication service.

Scores of former and serving military personnel joined dignitaries, local residents and invited guests for the dedication of a memorial stone in honour of the soldiers and air crew, who lost their lives in a Second World War exercise to prepare for D-Day.

The rector of the Bridge benefice, the Rev Tony Forrest, led the service at the top of a hill near Warnford. Those attending were asked to recall the scene on April 4, 1944, as an RAF Stirling towed a Horsa glider full of soldiers from the airborne infantry division as part of a night-time training exercise.

The aircraft had to fly low because of low cloud, and there was no lighting because of the blackout. The Stirling crashed into a tree to the east of Warnford Park, sadly killing all 27 soldiers on board. The Stirling flew on with major damage and crashed near Romsey, killing all six of the aircrew.

Pupils from nearby Droxford Junior School read out the names of all 33 servicemen who had died as the wreaths were laid, after which headteacher Matthew Dampier and a pupil also laid a wreath. The Revs Tony Forrest and Richard Smith then jointly dedicated the memorial stone. Regimental prayers were prayed, the Kohima Epitaph was said and the National Anthem was sung.

After the dedication service, an RAF Hercules performed a flypast as a tribute to those who had given their lives in service.

Pupil Holly Cusworth, aged nine, said: "My great-grandfather fought in the World War and we've been learning about it in school, so I was happy to be involved. It was really good and I felt really proud."

The event had been organised by a team led by retired paratrooper Major Will Pike, whose parents-in-law own the farmland on which the memorial stone is now situated. He told those who attended that the current conflict in Ukraine was a reminder of the vital role of the Armed Forces to help preserve civilised society.

"This incident was mentioned by a local vicar in a Remembrance service a couple of us attended in West Meon a year or so ago," he said. "I don't think it was widely known about in the village, but we were both airborne forces, so we thought it would be fitting to set up a memorial to their memory. We often remember those killed in action in war memorials, but it's easy to forget those servicemen killed in accidents.

"Coming from airborne forces, one has a close bond with aircraft which carry us into battle. I was reminded of the time in Afghanistan, commanding a company of 30 or 40 soldiers in the back of a Chinook helicopter. One thing goes wrong and you are in a very similar situation. So I have a profound feeling of bonding with the soldiers in this incident.

"We wanted to place the memorial stone here, next to the South Downs Way, so lots of people can see the names and the description of what happened. I hope they will think of those who have served in conflicts then and since, and the service that these people have given to our country in pursuit of the values we hold dear."

Many former and serving members of the King's Own Scottish Borderers (KOSB) were present for the service, marking the fact that it had been the 7th Battalion of the KOSB that were converted to the airborne infantry role in 1943. They took part in Exercise Dreme throughout 1943 and 1944 to prepare their division for parachute and glider operations. The glider that crashed contained members of No. 3 Platoon, ‘A’ Company, 7th (Airborne) Battalion, King’s Own Scottish Borderers.

They were part of the 1st Airlanding Brigade, which was part of the strategic reserve during the Normandy landings on D-Day. The brigade were assigned to Operation Market Garden at Arnhem in the Netherlands. This entailed three airborne divisions capturing bridges to be used subsequently by the British Second Army.

To see more photos of this dedication service, click here

The names of those who died are: